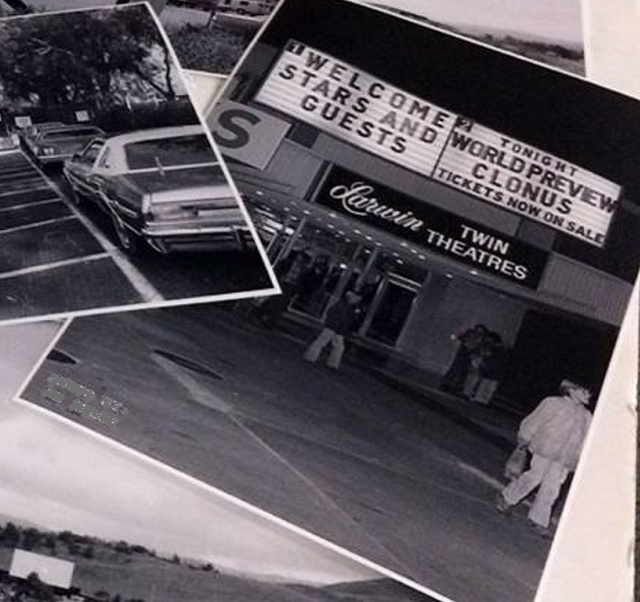 The Larwin Theatre opened on November 6, 1965 with 850 seats. It was twinned in 1973. It was located in western Simi Valley on E. Los Angeles Avenue near Madera Road in the Larwin Square Shopping Center, roughly a half-mile from The Simi Drive-In.

Here is a June 1974 ad from the Valley News. The Larwin had two screens at a minimum:
http://tinyurl.com/3d6y6k

Some facts from my first-hand knowledge:

Hey, rtm242; got some questions for you.

1) For sure either 1979 or 1980, I am unsure the exact years as I was too young to even realize what the movie really was about and only found out later after we moved.

3) Sorry, not something I’d remember, but definitely on the west side of town, not quite as far as the drive-in. Based on the newspaper ad linked above by “ken mc”, it would be here: View link

I also seem to recall this shopping center held a Montgomery Wards department store if that helps track it down. :–)

The Larwin theatre had only one screen when it opened in the 1960’s. They added a second screen in the mid 1970’s. I worked there as an usher in 1973, but was fired for letting friends sneak in for free through the back door. Thrifty mart was the grocery store, and Thrifty drug had 5 cent ice cream cones. The dept. store was Grants, with a small restaurant called the Bradford room. Builders emporium opened later, and a favorite for the kids was “Ron’s” toy store. This was the second shopping center in simi, the first was on tapo st. with a Von’s grocery store. At the time both Larwin, and the simi drive in were owned by Pacific theaters.

Oh yea, the drive in was a good two miles down the road from the Larwin theater, on Los Angeles ave.

Originally built for Metropolitan Theatres, the Larwin opened as a single screen house in late 1965, two years after the same circuit had opened the Simi Drive-In. The Larwin was the company’s first shopping center theater.

Plans to convert the Larwin into a twin were announced in the April 16, 1973, issue of Boxoffice Magazine. Work was to begin shortly, and Metropolitan’s head, Bruce Corwin, said the project was expected to be completed by mid-June. The conversion would give the Larwin auditoriums with 500 and 300 seats. The house had originally seated 850.

I saw so many great films there when it opened. They had a Saturday matinee for kids with a DJ/host fellow who gave away free stuff for our lucky ticket stub.

The matinee would show about four hours of ancient, b/w films like “The Bowery Boys in Africa” and often I’d remember that the film would tear and or catch fire.

Of course, the A films were shown on Thursday-Saturdays for…what, .35 cents or something?

I remember seeing the Beatles “A Hard Days Night” there about a year after it was officially released. And they also showed a now extremely rare Stones documentary called “Charlie is my Darling”.

I have quite a long list of films I saw there like The Long Ships Crack in the World Dr. Strangelove Atlantis, the Lost Continent