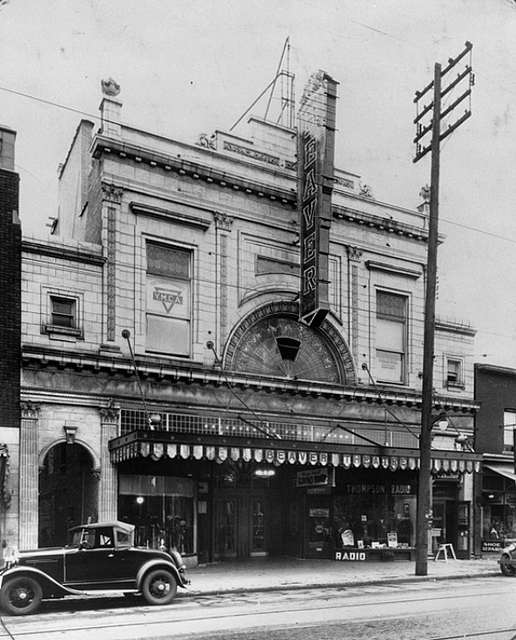 The Beaver Theatre was one of the earliest purpose built cinemas in Toronto opening in 1913. By 1919 it was owned and operated by the nationwide Allen Theatre chain (run by Jules and Jay Allen of Brantford Ontario) until being bought out by Famous Players in 1923. In the 1940’s until its closing in 1961 it was operated by 20th Century Theatres inc. It had had a very imposing Adamesque facade and marquee, a picture of which is on page 66 of THE NABES by John Sebert. The name refers to the National Animal of Canada, the noble and clever beaver – as far as can be determined it never showed adult fare. More photos are in the Archives of Ontario.

The Beaver was quite an opulent theatre for the West Toronto neighbourhood in which it resided. But it wasn’t the only cinema along that street. Have a look at a feature celebrating the cinemas of the Junction at 32 Elvis Movies.

I was never in the famous old BEAVER theatre ‘way west on Dundas West near High Park and Pacific Avenues. Though I lived north of Dundas between Bathurst and Ossington I remember walking to the building that was the former Beaver with a friend (Maurice) when I was approximately 12 years old. I would love to be able to see a picture of the Beaver interior from its golden years before it was closed forever in 1961, one of the first theatres ( in my memory ) that closed so early. With dwindling attendance it was uncerimoniously closed with no attempt to make the theatre work in some capacity for the Junction.

A picture of the Beaver Theatre, date unknown: View link

Updated link to SilentToronto’s posted link on May 26, 2009.

The BEAVER THEATRE closed in 1961. It was built by the Allen Family, but when their organization disintegrated, the receivers Clarkson & Co. sold it to Sam Bloom and Sam Fine of B & F Theatres, Limited who were a Famous Players affiliate. Pornography was NEVER shown at the Beaver!!! The Beaver was located in a section of Toronto known as The Junction!!