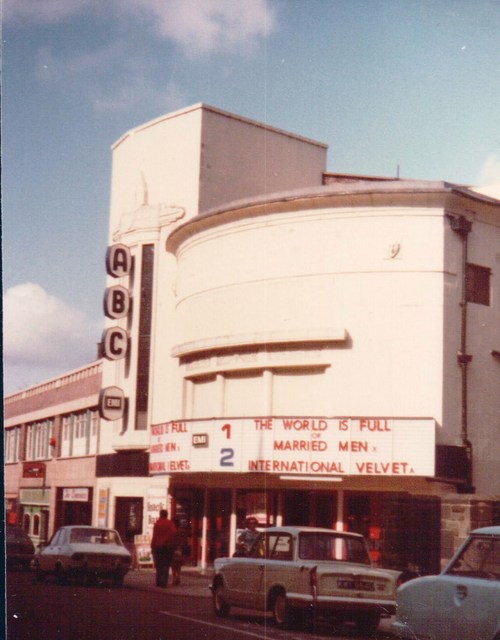 The Regal Cinema commanded a superb central position in Harrogate and was a particularly fine design by Associated British Cinemas(ABC) in-house architect William R. Glen working with local architects H. Linley Brown and H. Taylor. Total seating was provided for 1,646 in stalls and single balcony. There was an unusually lavish, and wide proscenium arch with three illuminated panels either side on the splay walls, the central one containing one of the stylised "Oscar" figures similar to the Halifax Regal Cinema.

It opened on 18th September 1937 with Otto Kriger in “Glamorous Night” and Joel McRea in “You Can’t Take Money”. Organist Wilfred Southworth opened the Compton 3Manual/6Ranks organ which had a melotone attachment and an illuminated console position on a lift.

The Regal Cinema was renamed ABC in the early-1960’s. In 1973 it was twinned with half the under-balcony area becoming a 130 seat cinema (ABC2) and the the remainder a Painted Wagon pub. The balcony continued as ABC 1 apparently unaltered, and retaining all the original features.

However the ABC’s excellent location proved it’s undoing and on 26th February 1983 it closed. It was sold for redevelopment and swiftly demolished to be replaced by a parade of shops including a McDonalds outlet.

To my mind, one of Glen’s best interiors. The wide proscenium arch and restrained splay wall treatment with its concealed lighting and slender statuettes made for a handsome auditorium. The largely coffered ceiling had three large roses above the front stalls from which were suspended “ABC” spray chandeliers. A gold, satin festoon curtain was lit in the primary colours and secondary blending by footlights and, behind it, a festooned border was lit either red or green by a batten which was typically operated when trailer leads or theatre sales adverts were being screened. CinemaScope was particularly effective within such a relatively wide opening (compared with York ABC’s more restricted arch). I was in a capacity audience at the opening performance of a pre-release run of “Doctor Zhivago” at Harrogate ABC in 1967 and the presentation was “top notch” throughout. I believe that, when the cinema was demolished, the “Oscar” style statuettes were rescued and installed at the Halifax ABC where that cinema’s own, similar figures had been lost.