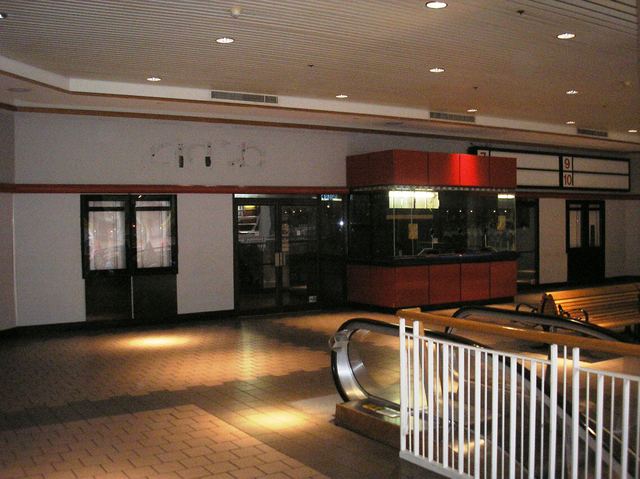 Originally a GCC theater that opened in the 1970’s as a six-plex at Springfield Mall in the southern portion of Fairfax County, Virginia. An additional four-screen location was added at the opposite end of the mall in the late 1980’s. During the slower months of the movie going year one end will typically operate at reduced hours. The largest house has 660 seats, the smallest has 225.

Thanks for the shot. It’s been about a year since I’ve been in the mall.

Thanks for that update on the chronology kengcc. I didn’t start frequenting the place until the 80’s. I’d agree, there was a stretch there where this was a really good place to see a movie.

The last movie I saw here was “Zodiac” in February 2007. It was so hot in the auditorium I was sweating.

I hadn’t been to Springfield Mall since then, so I didn’t know this place had closed until now. The Washington Post really should put something in the business or metro section when a local theater closes. (The Lee Highway Multiplex closing came as a complete surprise too). But it seems the paper only cares if a DC theater closes.

Instead of the Springfield Mall and the former AMC theaters being torn down into an urban complex for drug dealers, Hispanics, possibly Koreans and Pakistanis, I wish this mall would get converted into an anime convention called “Beltway-Con” with the Funimation Store inside, with the food court intact sponsored by other fast food retailers (Subway, Pizza Hut, Panda Express, Popeyes, Dairy Queen, Burger King, etc.) and a other retailers such as FYE and Borders and the movie theater (both floors) renovated to screen anime shows and movies (first run, older and newer) by other licenced companies. That would be cool, but it will only be a dream.

I had the good fortune of getting inside the 7-10 theaters the other day, and they’re still in good shape! The projectors and seats are still in there, and the lights are still on. Because of that, I’d say they plan on reopening after the renovation. You don’t just leave decent projectors in disuse like that.
There weren’t any reels around, but I’m pretty sure the projectors would still work. No visible issues with them, and with the exception of one torn screen, the screens are still fine. Lots of memories in that place, and I thought I should see it one last time just in case they tear it all down. I took a 2 hour look around, and I didn’t see a single reason they couldn’t reopen in a month or two if they had the willpower.

I got a few shots of the 7-10 before they were boarded up and would love to see photos of the 1-9 theatres. I think AMC still hold the lease and will open a new complex in the mall if and when the renovation gets underway.

New Springfield Mall Cinema coming in 2011; Article from the February 22, 2011edition of the Fairfax Times
â€œSpringfield Mall owner Vornado Realty Trust also is ready to take advantage of the expected traffic and population boom, and is taking the next step toward achieving its vision for an urban-style town center development around nearby Springfield Mall.
Vornado representatives declined to comment on the company’s exact plans. But, according to Fairfax County Supervisor Jeffrey McKay (D-Lee), a 10-year redevelopment of the mall — split into four phases — is currently under way.
“It is a mall revitalization project that will develop into Springfield Town Center, with high density office and residential space,” he said.
Phase one, which McKay said could begin as early as next month, is an interior renovation of the mall, including an improved food court and construction of a new movie theater.â€

I remember waiting in line to watch the opening day of Star Wars Return of the Jedi. We waited in line for over 6 hours and it wrapped around the mall- almost entirely around it. It was crazy! I lived closer to Skyline Mall so usually went to AMC there but Springfield on occasion. I will miss the mall and theater. Lots of memories. Did anyone have an ice cream birthday party there at Farrell’s ? They had this HUGE ice cream bowl with like 20-30 scoops for the party to dig in. Not very hygienic but loads of fun. I guess this is part of getting older-watching those things we loved from our youth slip away. Bummer

It appears that Regal is building a twelve screen complex in or around where the initial six auditoriums were. It will be all stadium seating and is scheduled to open in November 2014.

Does anyone have any photos of the auditoriums of the old Springfield AMC theater? The last film I saw here was back in 2002, Austin Powers in Goldmember.