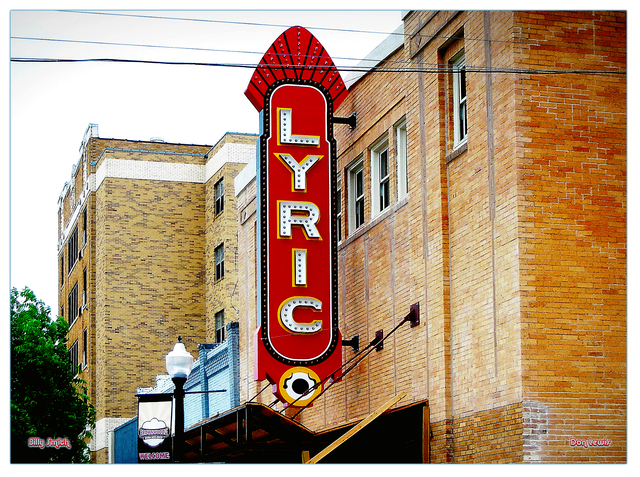 The Brownwood Lyric Theatre was built in 1914. By 1941 it was operated by Paramount Pictures Inc. through their subsidiary Hoblitzelle & O'Donnell. It was still open in 1952 but had closed as a movie theatre by 1955. It is currently a performing arts theatre.

When the Lyric Theater here did not open for the matinee performance Tuesday afternoon, it marked the end of an entertainment span covering 40 years.
The theater was closed Monday night by its owner, Mrs. James F. Holland. The Brownwood landmark was opened in 1918 and ranked as one of the oldest in West Texas.
In addition to serving up a varied movie diet for area patrons over the 40-year period, the Lyric participated in many community activities during the time.
One of the first recorded in the files of The Bulletin was in March of 1936 when The Bulletin and the theater cooperated to present free theater tickets to careful drivers in the city. A secret committee of 10 men watched for careful drivers in the downtown area, and when
such a driver was spotted the license number was taken. The driver was later given the free tickets.
1936 was a busy year for the Lyric. That year saw many things, including a change of managers from Robert D. Sparks, who retired, to Pierce Thomas. Thomas gave way to Lew Bray in December of the
same year. That was also the year movie stars John Boles and Gene Autry visited Brownwood and the Lyric. Boles attended a movie there Nov. 23, 1936 as he and his brother spent the night in Hotel Brownwood on their way to a deer hunt in Mason.
A native of Greenville, Boles played in such movies as “Rio Rita,” “Rose of the Rancho,” “A Message to Garcia,” “Craig’s Wife,” and “Back Street."
Autry, whose movie credits need no introduction to local western fans, was in Brownwood Dec. 1, 1936. He made personal appearances at the Lyric Theater during the day. The singing cowboy was accompanied
by his storied horse, Champion. The two paraded down Center and Austin avenues from the courthouse to Daniel Baker College.
In December 1936, renovation work started on the Lyric. The theater was closed from Jan. 3 to Jan. 8, 1937, to complete the work. Improvements included a new screen, new seats, new sign, and a new heating system.
The next movie star to visit Brownwood and the Lyric was Rufe Davis, mimic and hillbilly performer. He visited on Dec. 5, 1938. Davis achieved fame through his ability to imitate almost any sound, from a mosquito to a crack railroad train. He was billed as one of the nation’s top comics at the time.
Jackie Coogan, who was a star in both silent and "talkie” movies, was at the Lyric for a two-day engagement Feb. 6-7, 1939. He was featured in more than 20 movies during his career, including such favorites as “The Kid” and “College Swing."
Final ownership changes for the Lyric were in December, 1952, when Guy Cameron purchased the theater from Texas Consolidated Theaters, Inc., in May, 1953 when James F. Holland and C. A. Thomas purchased
the firm from Cameron, and in May, 1958 when Mrs. Holland became owner.

One exterior photo in below link. Copy & Paste to view.

The June 19, 1914, issue of The Daily Bulletin, Brownwood’s newspaper, said that J. M. Robb of Big Springs had taken a one-year lease on the Brownwood Theatre, and that his son Harrell Robb would become the manager of the house. The partnership of Pearman & Griffin had operated the theater since its opening in March. The article didn’t mention the name Lyric Theatre, so it probably got that name some time later, perhaps in 1918 when the 1958 Bulletin article LouisRugani cited in the first comment said that it had opened.