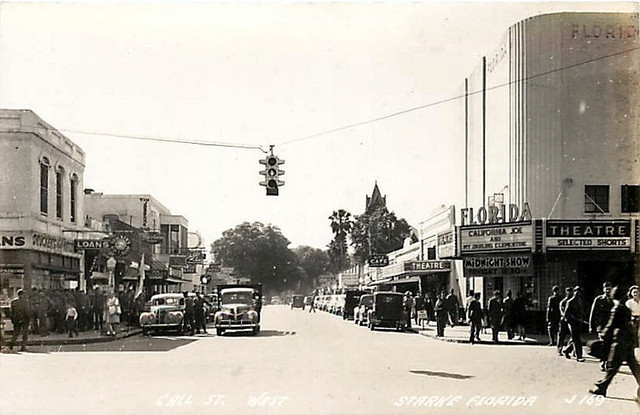 Here is another photo:
http://tinyurl.com/yzwhoz9

The July 3, 1941, issue of The Film Daily ran this item about the Florida Theatre:

“Starke, Fla.— 0. C. R. Stageburg, of Gainsville, has completed plans for the new Florida Theater, being built for the Manassa family, owners and operators of several Florida houses. Building contract has been awarded R. H. Mathe & Son.”Stageburg is probably not the correct spelling of the architect’s name. A 1939 issue of the FAA Bulletin (Florida Association of Architects) spells it Stageberg, and as he was an officer of the organization they probably spelled it right.

Another theater was planned for Starke in 1940, but I’ve been unable to discover if it was built or not. Noted in the October 11, 1940, issue of The Film Daily, it was to be a 1000-seat house designed by Roy Benjamin for the Sparks chain, and would have been built at Call and Court Streets. Court Street is not on the map, but Google Maps puts a pin icon for it anyway, down the block west of the Florida’s site. Court Street appears to have been absorbed into a parking lot since then.