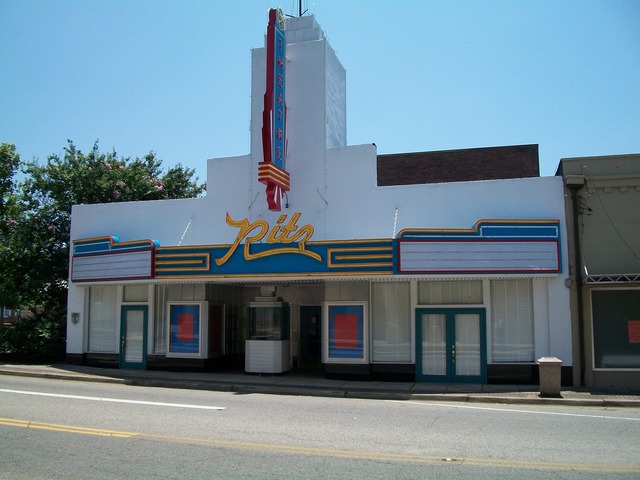 The Ritz Theater opened on December 5 1935 with George Raft in “She Couldn’t Take It”.

Here is some additional information:
http://tinyurl.com/26dvj2

Another citizen-motivated theatre success story. Opened in December, 1935 the Art Deco RITZ Theatre was built by local attorney Calvin Poole with seats for 500 on the orchestra floor with a hardwood stage and wool carpeting from Belgium. By the 1980s, however, the geometric patterns on the walls had been covered in acoustic burlap which had begun to sag. The seats were worn, the carpeting had been removed, and the moldings and accents were covered in monochrome paint. Local citizens moved forward to restore the RITZ. Greenville bought the theatre in 1982 with the Greenville Area Arts Council promising to put sweat equity into restoration. Original monochrome photos were used, and period books suggested appropriate colors. Three months later, a stage show was produced. Then the City reroofed the RITZ and built new dressing rooms under the stage and a nine-foot extension of the stagehouse.

With a combination of grants, fundraising and city support, a new heating/cooling system and new ceiling went in over the next eight years, and then the project expanded to the two buildings flanking the RITZ for a Deco reception room with a kitchen and additional restrooms, a conference room, hardwood floors and new Art Deco light fixtures and furnishings.

The RITZ hosts several GAAC productions each season, plus recitals, school plays and similar programs in its born-again role as a civic auditorium.