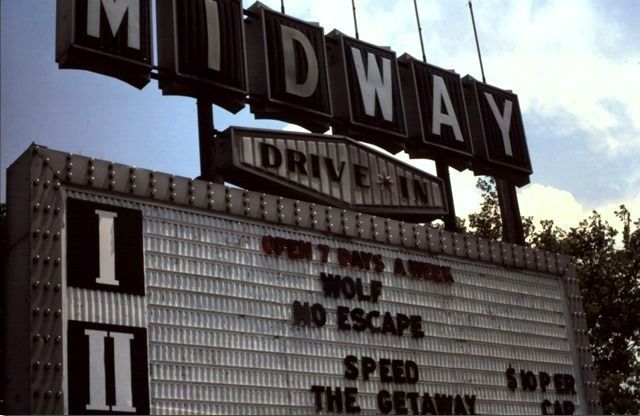 Designed by architect Jack K. Vogel as a single screen drive-in, the Mid-Way Drive-In was opened prior to 1955. It was sold to John Knepp in the early-1990’s. John Knepp later added a second screen. The original Jack K. Vogel-designed screen tower was destroyed in a 2000 storm and replaced by a new screen for the 2001 season.

The Wikipedia entry for the Midway says (as I type) that it was built in 1955. That’s wrong. It probably opened on July 21, 1950, and was definitely open a week later.

The 1952-56 Theatre Catalogs listed the Midway as owned by Paul Vogel, capacity 525.

The 1952-53 Motion Picture Almanac showed the “Mid City Drive-In” in Ravenna, capacity 400, “owner or booker” Ohio Theatre Service Corp. The 1953-63 MPAs changed only the “owner or booker”, to Co-operative.

The 1966 MPA listed two drive-ins for Ravenna, the Mid City and the (newer?) Midway, capacity 600, owner Vogel Theatres. By the 1969 edition, there was only the Midway. Vogel was listed as the owner through the last MPA list in 1988.

The first reference to the Midway in the Akron Beacon Journal that I could find was when it (apparently) first advertised on July 27, 1950, saying it was “now open”. An October 1951 classified ad said to report to “back of Midway Drive-in theater” on Kent-Ravenna Rd. On July 21, 1952, the Midway ad said “tonight only” was “Our Anniversary” and promised a giant fireworks display.

The May 6, 2005 Daily Kent Stater said the Midway was built in 1949 by Jack Vogel, then Knepp bought the theater from Vogel in 1990. I’m not so sure about those dates.

That Wikipedia entry said Knepp was the one who added the second screen. The first time the Akron Beacon Journal called it the Midway Twin was in a June 1989 traffic accident article. HistoricAerials.com shows a second screen in place by 1994.

The Akron Beacon Journal of Aug. 6, 1997 said the two-screened Midway’s owner was “held in trust by Larry Koerber, leased to John Knepp”. As of 2017, Knepp still owns the Midway.