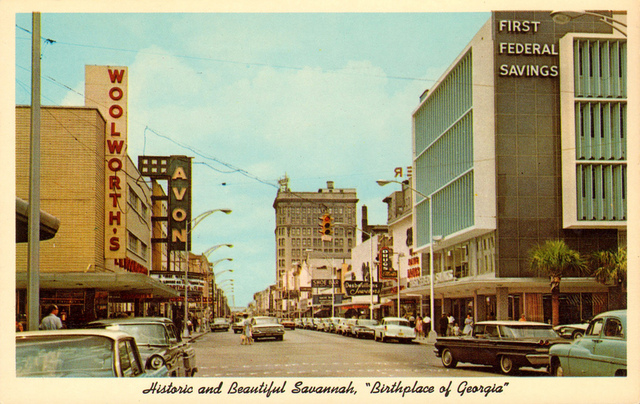 Built on the site of the Band Box Theatre. The Avon Theatre was built in 1944 and closed in 1970. The former Avon Theatre auditorium has now been demolished. Its lobby is now a Japanese restaurant.

“Historic Signs of Savannah,” by Justin Gunther (Google Books preview,) says that the Avon Theatre was built in 1944. A smaller theater originally called the Folly and later the Band Box was demolished to provide space for its entrance building, and its auditorium was on a lot fronting on State Street. The Avon closed in 1970, and the auditorium has been demolished, but the entrance building, now a restaurant, still sports the Avon’s semicircular marquee.

Lucas and Jenkins Theaters and Wilby Kincey were both Paramount Theater partners.

In this picture, the Roxy Theater was where Woolworths is and the State was across the street where 1st Fed was.

Watch for reopening under a new name and format in November 2015: The Savannah Taphouse (http://savannahtaphouse.com/)

I used to go here all the time. the bill was double features and it cost around .25 cents. there was a lady selling peanuts here. I remember the front of the theatre with its half moon marquee and the lobby cards about six on each side. the now playing movies and the coming attractions posted. there was a concession stand and then an alley then the main theatre previously called the band box. they played music and then the darkened theatre. curtains opened then you could see a cartoon newsreel and coming attractions movies showed from 11;00 till 11'00 at night. you could sometimes hear the trashmen emptiying the dumpsters behind the theatre. the ambiance was incredible. thosr were the days.it closed in 1970.

I went to that Savannah Taphouse link posted in 2015 by JackCoursey, and it has a 360 view/virtual tour of the interior of both floors. It appears to have the original lobby floor, and additional seating on a second floor above what was presumably the auditorium. The kitchen appears to be on the former main auditorium floor.

The auditorium of the Avon Theatre has been demolished and its site is occupied by part of the multi-level parking garage that takes up the block from Broughton Lane to State Street and Drayton Street to Abercorn Street. The Savannah Taphouse occupies only the theater’s former entrance building, extending from Broughton Street to Broughton Lane. That is also the space once occupied by the Folly/Band Box Theatre, the small silent era house that the Avon’s entrance building replaced in 1944.

Thank you for the clarification. The virtual tour looked deeper than I guess it actually is.

Born November 1947-I was 11 and went to this show through my Teen years. This was a great theater, (we called it show). I won 2 bags of groceries from David’s Super market playing Bingo. They had Bingo and other entertainment during intermission. Tickets, 15 cents for kids and 35 cents for adults. Popcorn and coke was my favorite! Cartoon, News reel, a short, (like the The 3 Stooges) and Double feature.