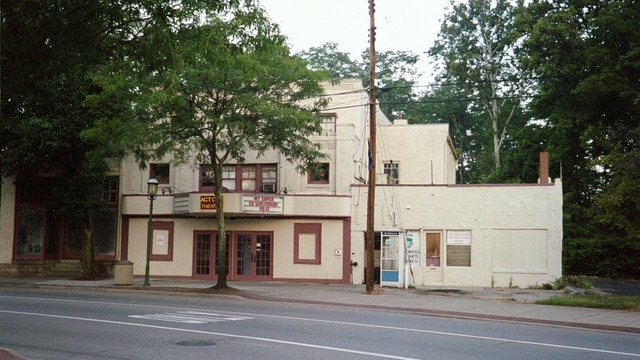 This theater had a simple design with a red brick first floor facade and a white terra cotta second story with matching flat columns, and two single sheet display cases flanked the entrance doors. An exterior ticket kiosk is not visible.

The Sharonville Fine Arts Council reopened this building as a performing arts space and movie house in mid-2008, known as the Sharonville Cultural Arts Center.

Here is a recent article from the Cincinnati Enquirer:
http://tinyurl.com/246grz

In a recent August Enquirer of 2008 article The Act 1 theater is due to have its official reopening on Septemper 20,2008. It will now serve as a performing arts center with some concert and film use.

August 9 1974 the ACT 1 Cinema is a NEIGHBORHOOD THEATRES chain theatre. Admission was $1.50 and it was playing SPYS with Donald Sutherland and Elliot Gould. It was a second run theatre by 1974.

Act 1 was constructed in the 1920’s. Its second floor exterior has a typical art deco molding at roof level.

I lived there off & on for 10 years. (I’ve also lived @ The Villa Elaine in Hollywood where Man Ray, Frank Sinatra, Orson Welles & allot of others lived, Fred McMurray’s actual apartment in the movie Double Indemnity on N. Kingsley in Los Feliz & @ The Arthouse in Columbus,Oh where jazz musicians of the 1920s would stay as well as Tina Turner in my actual apartment in later years. In NONE of these places did I know their history until I moved in. ALL were sheer coincidence.) So, anyway I knew the Simpson family (who owned the property & building) very well. And they were REALLY quite a family !! Esther Simpson was something else !! They all were !! So…if anyone has any questions regarding the history of that building, feel free to contact me because I’m probably one of the last people around with the inside scoop. And it’s quite a scoop! Joe Hartmann