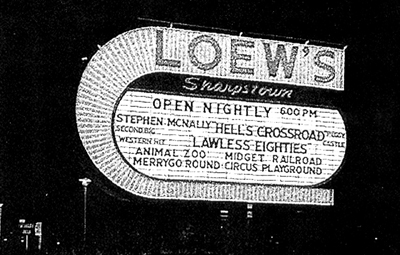 This drive-in was at the northwest corner of Hillcroft Street and Bellaire Boulevard in Houston, Texas.

The lot on which the theatre stood is now a strip mall.

John J. McNamara was the architect for the Loew’s Sharpstown.

Here is a February 1958 ad from the Houston Post:
http://tinyurl.com/yja8pa2

The official address was 6366 Bellaire Boulevard. Yes, this was the northwest corner.

My parents took me and my brother in a 1964 dodge station wagon to see the thiller charade with cary grant . We did not like the snake bar food so before the film my parents pick up a bucket of kentucky fried chicken-the colonels best for a in car picnic . My dad turned the car around where the back end of the dodge faced the movie screen and we put the tailgate down. With the chicken my dad carried a thermos jug of hot coffee to drink. For years the loews sharpstown tried to get accross the street- Globe shopping city to turn off there big red neon sign because it disturbed the movie patrons. the sign was five foot in the air and at the top of the neon sign would shine in red letters GLOBE. The shopping center said they where open until nine at night and that was advertisment for the store. So the patrons had to put with it. In the 1960s globe was the wal mart of its heyday. the company was owned by walgreens. By the end of the second feature my brother and I where fast asleep. What fond memories as a kid going to the drive-in theater. At one time in houston texas they had 23 drive-in listings in the local paper.

More memories of loews sharpstown. Saw a double feature of planet of the apes and the second film was fantastic voyage- two great 20th century fox films. It was in mid summer of 1968. During the humid nights of summer we went to the snack bar and puchased a couple of pic brand mosquito coils to keep the bugs away. Before the film the drive-in would show a bugs bunny and a pink panther cartoon then coming attractions of feature films. After the first film was over the flood lights that were on top of the screen came on and the film on the screen said its intermission time and would show hot dogs jumping in a bun-hot butter popcorn,pizza, hamburgers,soda and candy could be purchased at the wonderful snack bar. In the film also they had ads for coke dr.pepper and pepsi. After that the voice said its 10 minutes til showtime for the second feature film. When the film started the flood lights got turned off and the film would start.

When I was a child back in the early 60’s my mom was a ticket taker at the Lowes Drive In. I remember going there in a VW Beetle and my dad would put two little spanish chairs for my brother and I to sit on and watch the movie. We had a great time and this brings back memories. I do remember the flood lights on and then going off to start the movie. I wish we as a society had more drive inns. Those were the good days.