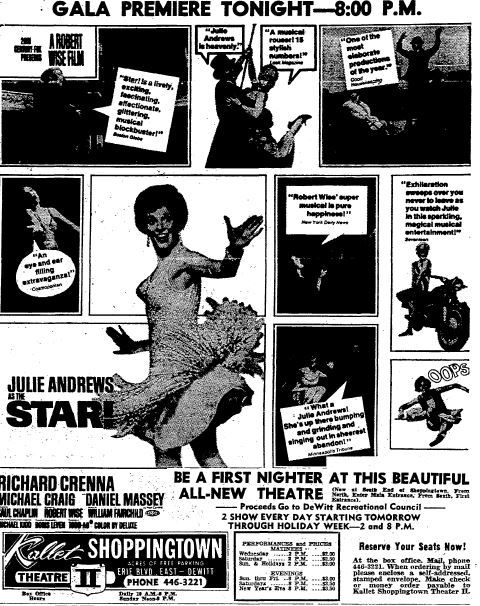 In 1968, when a department store was built in front of the original (1957) Kallet Shoppingtown Theatre, Kallet built the first twin theatre in central New York state. Sharing a huge outer lobby/gallery, the two identical 800 seat auditoriums each had their own inner lobby and restrooms. Between the two inner lobbies was a two-sided concession stand, through which you could see into the lobby on the other side.

The Kallet Shoppingtown I & II opened in December 1968 with two roadshows: Julie Andrews in “Star!”, next to Barbra Streisand in “Funny Girl”. Other roadshow engagements here were “Hello, Dolly!”, “Goodbye, Mr. Chips”, “Shoes of the Fisherman” and “Sweet Charity”. The Shoppingtown I & II was, along with the Kallet Genesee on the west side, the prestige theatres in Syracuse.

Further details of the Kallet Shoppingtown I & II and the original Shoppingtown theatre can be found at the link below.

Anyonr have any pictures of this theatre?

Even as a quad, this was a great theater. All 4 auditoriums were pretty large and had great presentation. Loews was the last operator. When Hoyts bought all of the Loews operations in Syracuse, this one closed, I believe.

Can’t believe this theatre opened with two musicals in each theatre,Stupid booking or either you folks up there like musicals!

Hoyts did operate this theatre after buying it from Loews up until their mall basement 10-plex (now the Stadium 14) was ready (it would have to be sometime in the mid ‘90s up until October of 1997).

“It was operated as a fourplex until the Shoppingtown was converted into a mall.”

What does this mean? Shoppingtown was always a mall.

The map is also way off. Shoppingtown is the gray area near the end of Erie just north of Genesee Street. IIRC, the cinemas were just north of Grenfell Rd, about where Dick’s Sporting Goods is today. I watched a few movies there including Return of the Jedi and Cocoon.

By the way, I could have sworn it was still a twin in 1983 when Jedi played, although it was definitely a quad by the time of Cocoon in 1985.

Correct address for this theatre was 3691 Erie Boulevard East, the current site of the mall’s Chili’s outparcel. The Chili’s replaced this theatre when Hoyts and then mall owner Wilmorite elected to move the theatre into the basement in 1997.