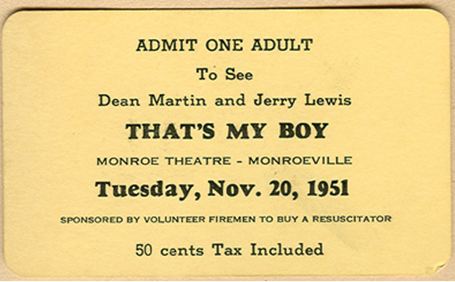 The Monroe Theatre was converted from a corner grocery store sometime in or around the 1930s. It survived as a showplace at Summit and South Streets until around 1960 when Peace Mission Lutheran Church bought it. It had several owners while it existed as a theatre, two of whom were: George D. and Betty A. (Jones- Shondell) Fellers. They sold it around 1957.

Judging by several newspaper articles from the day, the Monroe Theatre was an important part of Monroeville, Indiana. It was used to raise money for charities, etc.

Looking for photos of the theatre.

This landed in my email:

I’ve been doing a little research on the Monroe Theatre (204 South St.) in Monroeville, Indiana. My Great Grandparents, George and Betty Fellers, were the 2nd owners till they sold it around 1957. I believe it operated as a theatre for several more years when the congregation of St. Mark Lutheran (across the street) split and the Monroe became Peace Mission Lutheran Church. Afterwards, it was a NAPA store until the structure was deemed unsafe after a storm and eventually torn down in 2004.