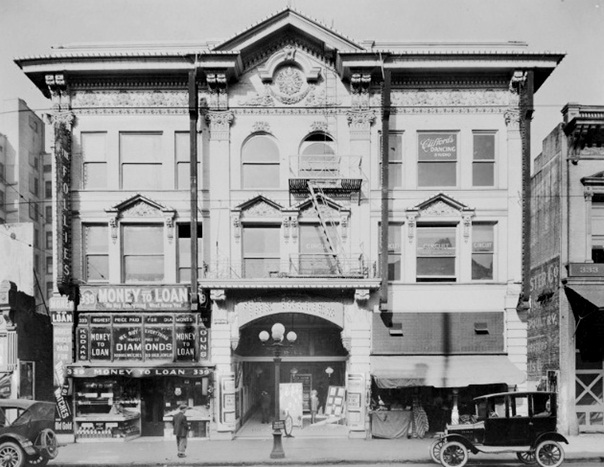 The Belasco Theatre opened in the early-1910’s and was briefly renamed Republic Theatre from December 23, 1912 presenting vaudeville, before being renamed Follies Theatre in 1919.

It was remodeled by architect S. Charles Lee in the 1930’s.

The Follies Theatre was demolished in May 1974.

Here is part of an article about the demolition dated 5/31/74:

The end, when it came this weekend, was mercifully swift. A few well-aimed wrecking balls and the tottering old Follies Theater at 327 S. Main St. fell in upon itself like the collapsing star it was.

Built originally as the Belasco Theater and opened in 1904 as the Los Angeles home of the celebrated Belasco Stock Co., the landmark managed to cling to an aura of respectability only for little more than a decade. But as the theater district moved south, the Belasco name was withdrawn to be used on another theater in the 900 block of S. Hill St. and the Main St. house became forever more a home of burlesque.

From World War II on, it was a downhill slide for the musty old theater, as burlesque went the way of vaudeville and both were replaced with cheap skin flicks. The Follies was raided, closed and then reopened half a dozen times before it was finally abandoned to the bulldozers. The old Follies, the last burlesque house in Los Angeles, will fulfill its destiny as just another parking lot.

Here is the USC photo from the teens that I posted a while ago:
http://tinyurl.com/ycdswbb

Thank you for this information! I am working on a biography of Dixie Evans, The Marilyn Monroe of Burlesque. The Follies Theatre was the first burlesque theatre she performed at (around 1952) and she discusses some of the acts that were there. Seeing images helps me contextualize her stories. Thanks again!

Any time. This theater is one of my favorites.

Here is a nice view of the Follies:
http://tinyurl.com/43beddx

If anyone has any stories about going to/ working at this threatre, I would love to hear them. I am chronicling the histories of adult theatres in the US. Please contact me at Thanks!