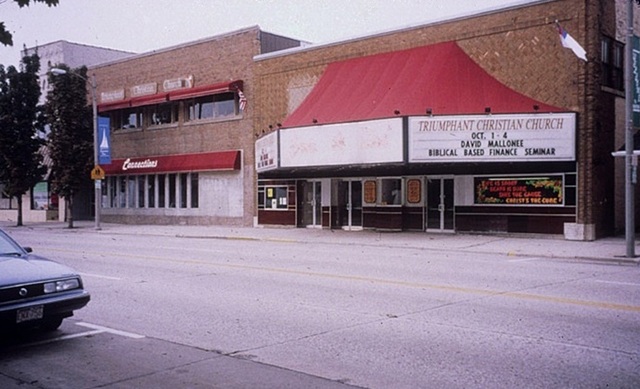 The Mikadow Theatre was opened in 1916 and originally had a seating capacity of 800. It was designed by Milwaukee architect Stanley F. Kadow. It was equipped with a 3Manual Moller theatre pipe organ. The theatre burnt down in 1956.

It was rebuilt to the plans of architect Sylvester Schmidt, with a seating capacity for 640, reopening in January 1957.

In 2002, Get Reel Inc. purchased this former theatre back from the church that was operating it. Tables adjoin theatre seats, so you can enjoy homemade pizza, sandwiches and appetizers, which can be ordered and will be brought to you while you enjoy the movie.

A multi-page article about the Mikadow Theatre in Boxoffice, June 8, 1957, said that the theater had reopened in an entirely new building on January 19 that year after the original house, built on the same site in 1916, had burned to the ground in 1956. The rebuilt theater, designed by local architect Sylvester Schmidt, had 640 seats. The article has photos of both the interior and exterior of the new theater.

Beginning in 1926, the original Mikdadow Theatre Building also held the studios of one of Wisconsin’s early radio stations, WOMT, as told on this web page. The owner of the both the theater and the radio station was Francis Kadow.

The Mikadow Theatre was opened in 1916. The March 16 edition of the Manitowoc Herald reported that “Stanley Kadow, who designed the new Mikadow theatre here, and attended the opening, has returned to Milwaukee.” He also did some remodeling on the house a few years later, as noted in this item from the May 21, 1921, issue of The American Contractor:

The fact that the owner’s name was Kadow probably explains why the house ended up with the name Mikadow instead of just Mikado. Architect Stanley F. Kadow must have been related to theater owner John M. Kadow. Stanley Kadow was quite well known, and at least three theaters were among the many projects he designed in Milwaukee.