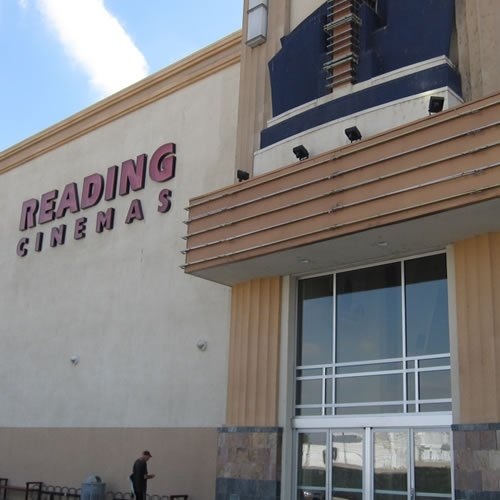 Pacific Bakersfield Valley Plaza Stadium 16 opened its doors in 1999, and to this day has provided excellent quality of movie presentation. Now under the management of Reading Cinemas.

According to an article in the Bakersfield Californian of December 13, 2007, Pacific Theatres is going to sell this multiplex and a number of others that are outside the greater Los Angeles area (a total of 15 of its 29 locations) to Reading International, a theatre and real estate company which is based in Commerce, California. Reading operates cinemas in Australia, New Zealand, the U.S., and Puerto Rico, as well as several live performance venues in the U.S., mainly in New York.

Reading’s best known cinemas in the United States are probably the Angelika Film Centers in New York and Texas.

I think that this multiplex may have replaced an early 1960s theatre called the Valley Plaza, which was originally built by Statewide Theatres and then operated by Loew’s Theatres beginning in 1967, but I can’t find any confirmation that this shopping center was that theatre’s actual location. Does anyone familiar with Bakersfield in the 1960s know anything about it? The building would have been a near-twin to Statewide’s Inland Theatre in San Bernardino.

The original theater was almost in the same location. The Maric College was originally a Mayfair Market and Hodels sat next to it. The theater was set back from there to the left, but not as far back as the current location. It was originally built as a single screen theater.

I grew up in Bakersfield from 1964, when I was born, until 1972 when we moved. The Valley Plaza was amazing as my first theatre I ever remembered. The auditorium was large, as I remember, and was covered with gold and purple striped curtains. When the lights dimmed the striped curtains opened, revealing a gold curtain which then opened. After the previews the gold curtain closed, the lights went to blackout, and the gold curtain re-opened for the feature. During the summer they ran a special of weekly shows you could but tickets for in advance; such as the Disney/Dean Jones/Tommy Kirk family films. After I grew up, the National in Westwood reminded me greatly of this theatre. Sad they’re both gone. Nothing like a big single screen movie house.

The Bakersfield Valley Plaza 16 is now operated by Reading Cinemas. Pacific can be taken off the name.

There should be a separate page for the original Valley Plaza Theatre, opened in 1966 by Statewide Theatres, and later operated by Loew’s. Apparently it was demolished to make way for the current megaplex.