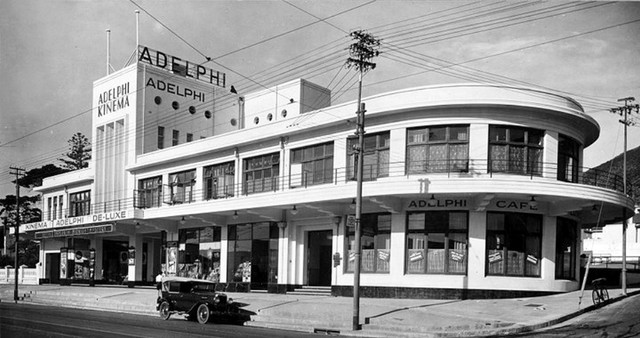 The Adelphi Kinema was situated on Main Road at the corner of Rhine Road, Sea Point.

It was opened by the Mayor of Cape Town, Councillor the Rev. AJS Lewis, on September 25, 1930 with the film "The Cuckoos" starring Bert Wheeler and Robert Woolsley.

The Adelphi Kinema had a restaurant and tea room, a children’s nursery with trained nurses in attendance as well as a ladies lounge.

Kallenbach, Kennedy & Furner and Wallgate & Elsworth were the Architects.
A. Pinner - Building Contractor

The cinema closed in early-1980’s the Adelphi Shopping Centre now occupies the site.

Photos of the Adelphi Kinema and two other theaters here. The Adelphi was in a splendid Streamline Modern building with a rounded end at the corner of Rhine Road. The site is currently occupied by a Pic ‘n Pay store in a building that is anything but splendid.

Street View is a block too far north, but the Google map’s pin icon is about ten blocks too far south. The Adelphi’s building was at the northeast corner of Main Road and Rhine Road.

And Walgate should have only one “l”.