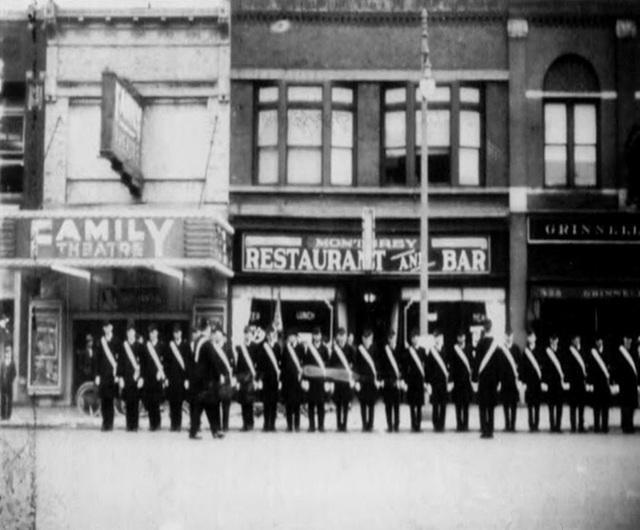 The Family Theater opened September 1, 1910 with 250 seats. It was enlarged in 1916 when a new auditorium was built and the former auditorium became the lobby. It closed around 1965.

There are recent (June 2007) reviews of the Huron Athletic Club Restaurant at this address.

No, just the reviews. They said the food was OK.

It looks like the screen is still at the end of the auditorium in one of the photos.

My Uncle Eddie, Edward Forgarty, was a part-time ticket taker in his retirement at the Family Theater on the main drag in Port Huron. The plan was this: my friends and I would stroll in just before the Saturday matinee and immediately go downstairs to the bathroom. After gathering our nerve, we would go up past Uncle Eddie into the movie for free, with his exaggerated wink.

I remember movies like Forbidden Planet, It Came from Beneath the Sea, Creature from the Black Lagoon….boy, am I that old?

The Family Theatre was opened by Charles Murphy on September 1, 1910. It was a storefront theater and originally had only 250 seats. By 1911 it was being operated by L. J. Bedford, who in late 1916 built a new auditorium seating 800 behind the original structure and converted the old theater space into a lobby. The expanded house opened on January 1, 1917.

In 1918, the Family Theatre was taken over by Herb Weil. For about a year, Weil controlled all five of Port Huron’s movie theaters, until the Majestic, which he had been operating under a lease, was bought by W. S. Butterfield in 1920. Weil continued to operate the Family after opening his new Desmond Theatre in August, 1922.