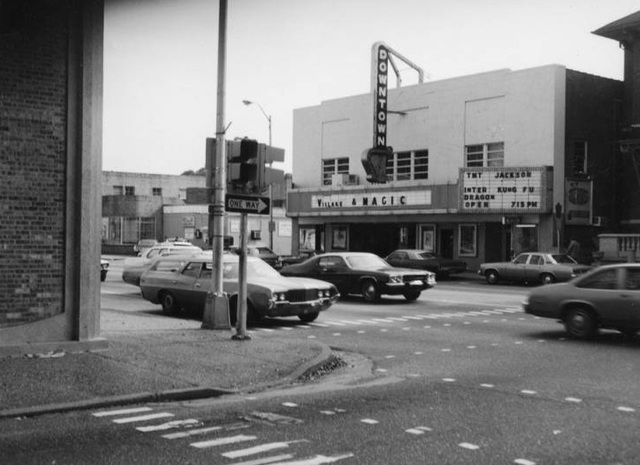 Demolished is now the present site of Government Plaza

In the 1960s (and I imagine before) this theater had Saturday specials that you could get into with a certain number of Golden Flake Potato Chip bags. There was a small stage in front of the screen where they had events and such, announced contest winners, and other things I have forgotten. Sadly, I missed all this because I lived way out away from Downtown. I knew what was going on, because these specials were advertised on WKRG-TV, which was, of course, owned by Kenneth R. Giddens. Giddens was one half of Giddens and Rester, who owned the Downtown Theater, as well as a lot of others. The picture is taken from the sidewalk by The Admiral Semmes Motor Hotel (now a parking lot), and the building in the foreground is WALA-TV. The building to the right of the theater is the Elks Lodge, and the one on the left is the Greyhound Bus Depot.

While looking up information on another theater, I found that Kenneth R. Giddens designed this one. According to an article in the Mobie newspaper, he was in the Navy at the time, and his designs were executed by his partner T. J. Rester.