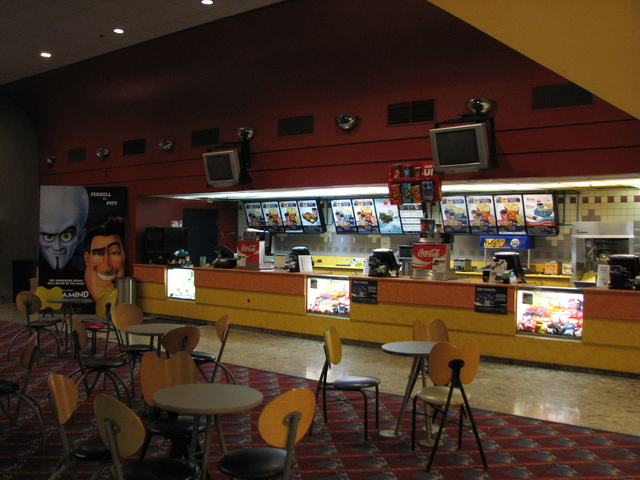 This 8-screen theatre opened on December 20, 1985 by Cineplex Odeon at the Canada Square shopping center. Loews Cineplex closed down the Canada Square cinemas because of their near bankruptcy and the new Silvercity north of the street. Rather then expanding the Silvercity at Yonge Street and Eglinton Center because of limited space, Famous Players quickly bought the Canada Square cinemas. This is the last non-branded Famous Players theatre before the company was bought by Cineplex back in 2005. The theatre still has the original 1985 interior and it sometimes plays art films.

A little late, Azzaelea, but here I’ve uploaded two photos I took of the interior back in September 2010. The theatre was pretty dead when I was there…

This theatre has a similar design to the Oakville Mews. Any other Drabinsky era Cineplexes still around with the original interiors?

You forget from 1998-2001, this theatre was part of Loews Cineplex, since Cineplex Odeon operated in from 1985-1998. Since 2005, Cineplex Entertainment owns this theatre.

Why did Cineplex continue to operate this one despite another newer theatre (Yonge-Eglinton) bringing in the crowds?

@CorusFTW; when I first visited here in 2013 it seems to me that Cineplex has the same management and operates both locations as a (now) 20-plex (then 17-plex) in two different buildings. Yonge-Eglinton only had 9 screens when it opened and that was the smallest Silvercity at the time with pretty limited space so I’m guessing when it went up for sale in 2003 FP thought an additional eight screens would be ideal to book more titles instead of a competitor possibly moving in.

Cineplex Odeon this theatre opened on December 20, 1985, with Fool for Love, Runaway Train, Out of Africa (70mm Six-track Dolby Stereo THX), The Official Story and Subway. When Famous Players re-opened it on October 26, 2001, its opening films were Mulholland Drive (Digital), Last Wedding (Digital), On the Line (Digital), Corky Romano (Digital), Divided We Fall (Digital) and Zoolander.

Loving all of your informative updates! It’s great to see someone mentioning the opening movies too.

This location is very interesting as it’s a well maintained museum of the 1985 Drabinsky-era Cineplex Odeon with very mild updates over the years. I feel if this location EVER gets an update it will be with luxury recliners.

Cineplex confirmed to BlogTo. The marquee was never changed to Cineplex, and remained as “Famous Players” until its closing. Only one complex remains in Canada with that naming, that in Prince George, BC

This is a strong loss for Toronto as even though attendance was way down, it was still a nice “extension” of sorts to the Yonge & Eglinton location, and you could step right off the Eglinton subway and walk up to the front doors without even going outside!