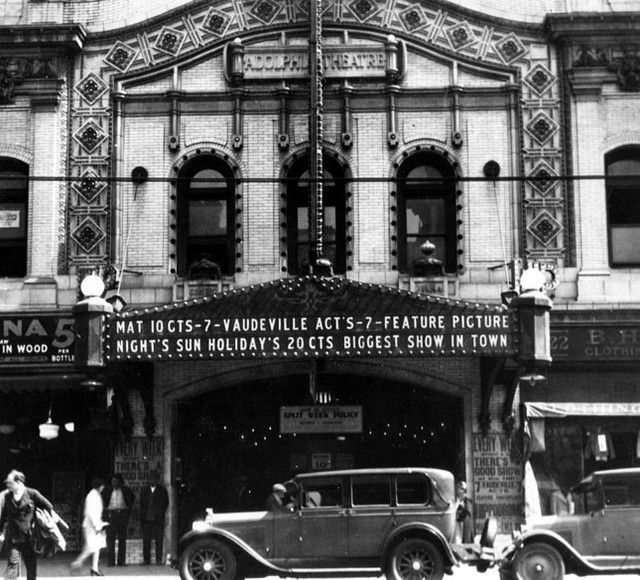 Opened as the Panorama Theater. It became the Adolphus Theater, preenting vaudeville from November 27, 1911 when it was taken over by Adolph Ramash after alterations had been made to the plans of architectural firm Mayberry & Parker. Seating was provided for 1,450, all on a single level together with 12 seats in each of the single boxes located at the side of the proscenium. The stage was 50ft deep. It was the largest of the theatres on S. Main Street in the downtown area of Los Angeles. In 1913 a 700-seat balcony was added, with plans provided by architect Otto Janssen and it reopened as the Hippodrome Theater on August 31, 1913 with 10 acts of vaudeville. Movies were soon added to the programme and it eventually became a full-time movie theatre.

After closing, the auditorium was demolished in September & October 1952 and the space used for parking. The front of the building remained for many years, housing a gymnasium. It, too, has been demolished.

I’ll have to find one of my pictures from a few years ago and compare. I used to walk by there every day but I’ve stopped because of the human defecation covering the sidewalk between Los Angeles and Main on 4th…..I take a different route now.

I agree-sidestepping all that gets me pooped out.

No, the Barclay is the hotel on the northwest corner of 4th and Main. The Hippodrome was on the other side of Main, about halfway down the block going north. The new condo complex is taking over the Westiminster site and part of the old Hippodrome site. When they were breaking up the concrete for the condos, some old theater tiles were uncovered in the process.

The Barclay was originally the Van Nuys.

You mean people just defecate in the streets around there? And people are going to live there? LOL.

In 1913, the Adolphus Theatre was extensively altered with the addition of a 700-seat, steel and concrete cantilevered balcony. The April 12 issue of Southwest Contractor & Manufacturer said that the project was being designed by architect Otto Jansson, which was probably a misspelling. The 1910 Yearbook of the Los Angeles Architecture Club spells his name Janssen. As he was then treasurer of the club, its spelling was probably right.

I added a 1946 picture in the Photos section of this theatre’s marquee. The general rundown condition of the neighborhood is obvious.