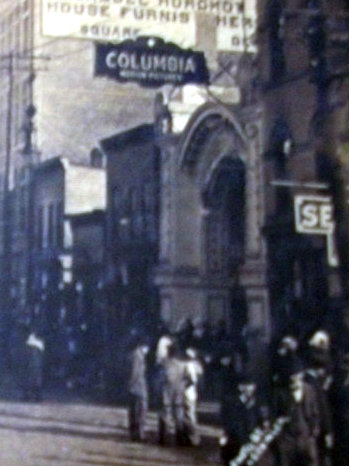 Opened in 1910 as the Columbia Theatre with 300 seats, it was the only remaining theater in downtown Portsmouth. The Columbia Theatre’s stage house and auditorium was expanded in the 1920’s to accommodate 1,100 seats, with vaudeville and stage productions. It received sound equipment in 1929 when architect Victor A. Rigaumont carried out some alterations to the auditorium. By 1941 it was operated by Warner Bros. Circuit Management Corp.

The Columbia Theatre closed in the 1980’s and sat empty for many years until an entrepreneur engaged in a 2 million + dollar renovation and reopened the venue as the Columbia Music Hall in 2006. Many concerts were held at the hall after reopening.

Unfortunately, it was extensively damaged in a fire in November 11, 2007, in which the rear of the roof collapsed, and substantial parts of the interior were gutted. One good sign - their web page said concerts are only “temporarily” suspended – the owner has vowed to rebuild! Unfortunately, this did not happen and the auditorium was demolished in May 2008, leaving only the facade and lobby.

A new auditorium was built, and reopened in April 2012 as the Columbia Music Arena.

This article was in the Portsmouth Times in February 1937:

Considerable damage was caused by floodwaters at the three Warner Bros.‘ theaters here and the Garden theater. The Columbia theater lost all equipment such as seats and carpeting. Damage to the Lyric Theater was confined to the decorations. Decorations at the Garden theater were damaged end a new sound machine is replacing the one damaged by floodwaters. Some seats at the LaRoy theater were lost and the carpeting on the mezzanine floor was damaged.

Work of cleaning out and renovating the theaters was started with the recession of the high water. The Garden theater has scheduled its opening for Sunday. Work at the Lyric theater is progressing rapidly, but it will be several days before the theater will be opened to the public. J. Knox Strachan, manager of the LaRoy theater, said none of the Warner Bros:‘ theaters will be opened for several days in order that they can be renovated and completely dried out. New equipment will be bought for the Columbia theater and the damaged equipment at the LaRoy theater will be replaced.

Scaffolding was built at the Columbia theater for the seating equipment, but the water went beyond a 70-foot stage, which the scaffolding had been built to protect, and all the equipment was damaged. The scaffolding fell in the front part of the theater, water stood within a few inches of the ceiling. Equipment of the LaRoy theater was stored on the mezzanine floor and in the balcony, but water reached the mezzanine, flooding it about a foot and a half deep.

The three Warner theaters, the Garden theater and the New Westland theater recently spent considerable sums to renovate and redecorate their interiors. The Westland already has reopened.

my name is mark tindall, and my brother aaron and i created a mural that was basterdized by a punk named charles reed. not to worry-we can fix it. it does not bother me that this puunk wannabe muralist tried to compete but when the punk touched our artwork he stepped over the line.

If I’m not mistaken but in 2011 the front facade of the Columbia Music Hall remained. The auditorium was gone, but fenced. The lobby appears preserved. Any updates?

The Columbia’s been rebuilt! They’ve been having shows there for the past couple of months. It’s been renamed, “Columbia Music Arena.” They even have a website and a Facebook page. www.columbiamusicarena.com facebook.com/columbiamusicarena

An item in the July 16, 1910, issue of The American Contractor attributes the design of this theater to the firm of Taylor & DeCamp. The partnership of Charles C. Taylor and Benjamin C. DeCamp was formed in 1909 and dissolved in 1912.

1936 flood photo added courtesy of Jeff Adkins via the “You Know You Are From Portsmouth Ohio If ?” Facebook page.

It crested at 74 feet, with flood stage being 50 feet. More than 35,000 residents were left homeless. Sixty three percent of Portsmouth was underwater.

Victor A. Rigaumont did the 1929 sound transformation that also modernized the theater’s auditorium. He said, “The Columbia Theatre in Portsmouth was remodeled under my supervision by Schine Enterprises Circuit…”