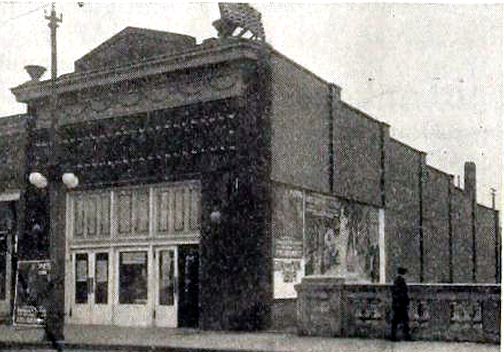 Looks like architects were Jack Liebenberg and Seeman Kaplan:
http://tinyurl.com/2v7og9

Boxoffice magazine reported in January 1935 that twenty thousand dollars was being spent to convert the building from a garage to a theater. It may have been a garage after it closed in 1926. Architects were noted as being Liebenberg & Kaplan.

I found a reference to the O'Klare Theatre being on North Barstow, not South Barstow, but I don’t know the exact source. It’s a Google Document reproducing page 295 of an unidentified book. The page describes a number of businesses in Eau Claire, and the paragraph about the theater says it was in “…the second building beyond the bridge….”

I think the address currently listed must also be wrong. The 1000 blocks are residential areas on the edge of town, and I don’t see any bridges near them in Google Street View. The only bridge on Barstow Street is in the center of town, and it’s the dividing line for north-south street numbers.

Did the listed address mistakenly get a superfluous 3 in it? I’m thinking the O'Klare might have been at 105 N. Barstow Street. 105 probably would have been in the second building north of the bridge, as the block would have started with 101 N. It’s also possible that the theater was at 103-105 N. Barstow, and this was written 103-5 in the source, but the hyphen got blurred out.

This was indeed on North Barstow. It was located on the east side of the street between the Eau Claire River and the railroad tracks.

This reopened as O'Klare on June 14th, 1935. Grand opening ad in the photo section.

This reopened as the Uptown theatre on September 28th, 1951. Listings stopped in 1952. Ad in photo section.