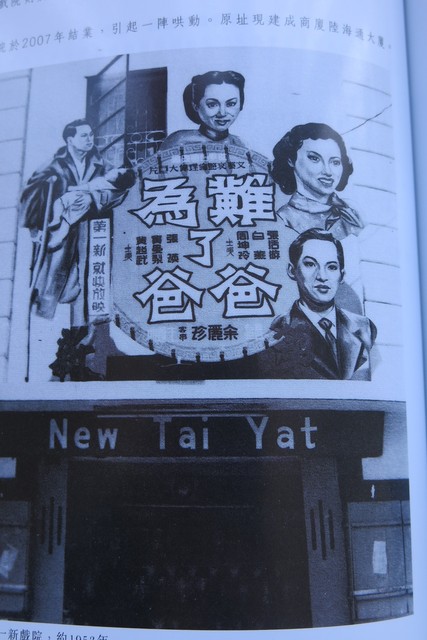 The Tai Yat Theatre was situated in the Yaumati district on the Kowloon side of Hong Kong.

Tai Yat, meaning ‘the first’, was the Cantonese pronunciation of its Chinese name. It opened to business at an unknown date before 1st April 1926. In 1931,an extension of the theatre was completed, and the theatre was renamed the New Tai Yat Theatre.

It was a neighbourhood cinema and showed selected films until the outbreak of war on 8th December 1941. It reopened at an unknown date in 1942 and showed films censored by the Japanese Army. According to a news report published by the Chinese language newspaper ‘Wah Kiu Yat Po’, the theatre was in business as of 17th October 1943.

The theatre reopened at an unknown date after the war, and showed selected English language and first run Cantonese films until its closure in May 1964. A polyclinic was built on the site of the theatre.

A old pic of this cinema as well as the neighbour Kwong ming: http://www.discuss.com.hk/viewthread.php?tid=19871416&extra=&page=45