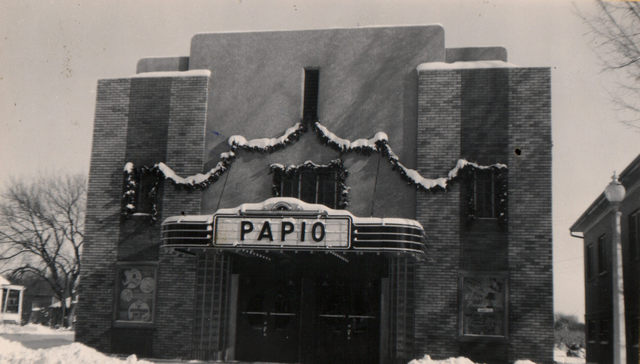 The Papio Theatre was opened on August 4, 1948 with Dick Haymes in “Carnival in Costa Rica”. The former Papio Theatre today is home to both the Rock, a concert venue, as well as a church and coffee house.

This is from the Baptist Press in January 1982:

PAPILLION, Neb. (BP)—By the time a visitor accepts the bulletin from an usher, he already has noticed something different about First Baptist Church. Posters that advertise coming attractions do not refer to coming concerts or revivals, but to the season’s latest releases from Hollywood. And the lingering smell is not from an after-services potluck dinner simmering in the church kitchen. It’s from popcorn.

First Baptist Church meets for worship in the Papio Theatre, an old-time movie house in downtown Papillion. The congregation has met at the movie house since August, after the church auditorium was converted to house the church’s Weekly Early Education School.

The pre-school was moved from the basement to the remodeled auditorium after state and local fire marshals told the church that Nebraska law states children under second grade cannot regularly occupy classroom space three feet below or above ground level, according to pastor Johnny Cox.

First Baptist will meet at the Papio Theatre until its new 5,000-square-foot auditorium is completed—probably in April 1982. In the meantime, members work together to smooth the functions of a church situated in two locations. Each Sunday morning two men clean the theater, set up the pulpit, arrange the choir chairs and complete preparations for worship. The church nursery, kindergarten church and children’s church are housed at the church building, and two men stay there during worship services to direct visitors to the theatre and to provide security.

My grandparents, Art and Blanche Sunde, ran theaters in Woodward & Elma, IA. During WWII my grandfather left my grandmother to run the theater in Elma and he became a sign painter on the Alcan Highway. He met a carpenter from Gretna, NE who told my grandfather that the county seat of Sarpy County, NE did not have a theater.

After the war, grandpa came and checked out Papillion. After talking with Papillion business men and bankers, he had the Papio built. My grandparents lived in the apartment above the theater for years. My first job was at age 12, I worked the candy counter. Grandpa told me that when I could see out of the window, I could learn to run the projectors. But that never happened.

The two bedrooms on either side of the projection room had openings with two sets of shutters. One set opened into the bedroom, the other opened out in to the theater. We used to try to watch movies when we were supposed to be asleep but grandpa always caught us. He was lucky that none of us every fell out of the openings.

My mother still has the movie logs he kept showing what movies were shown at the Papio.

Saw “Raiders of the Lost Ark” there in 1981 after they re-opened it for business. I don’t believe it stayed open very long that time and that was around the time the church(es) started using it.

This is nostalgic for me… I used to see movies here in the mid to late seventies when I was a young boy. My father was in the air force and we lived in Papillion from 1973-78. I remember seeing “Star Wars” here again and again – probably 5 times – in 1977 and a friend of mine was ejected for using his candy box as a whistle. The Papio Theater dominates my memories of being a young child. If I remember correctly, the park, right across the street from the theater, is where the 4th of July parades were held every year. :)

Art Sunde launched the Papio Theatre on August 4, 1948 with “Carnival in Costa Rica” supported by a cartoon in a sneak preview opening. The Grand Opening took place the following night. The 400-seat theatre was the first movie house in town since the early 1930s.