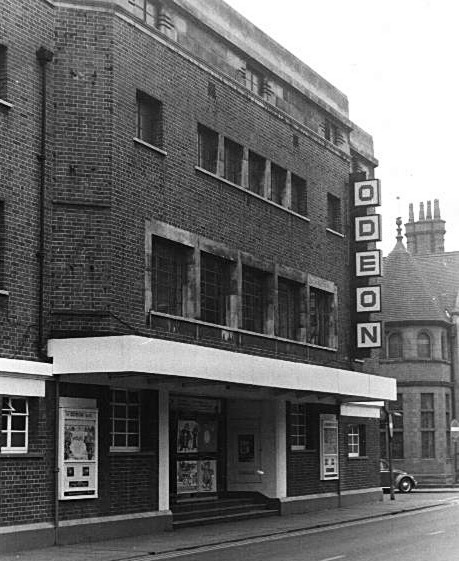 Originally the site of St. George’s Hall (1887), it was re-built as the New Theatre and Opera House in 1902 with the entrance on George Street. It went over to films in 1930 and was closed and demolished in 1934, to enable the construction of the new Ritz Cinema.

Designed by noted cinema architect John Fairbrother of Glasgow and local architect Thomas Jenkins, the Ritz Cinema was given a new entrance on Guild Street, whilst the original facade of the Opera House on George Street was retained at the rear of the building. Planned by the independent Burton Picturedrome Co., the Ritz Cinema opened on 11th March 1935 with Richard Tauber in "Blossom Time".

It was taken over by Provincial Cinematograph Theatres (PCT) on 5th September 1955 and re-named Gaumont from 25th February 1957. The Rank Organisation re-named it Odeon from 14th November 1966 and they sub-divided the cinema into a triple screen operation from April 1974 with 502 seats in the former circle and two mini-cinemas seating 110 each in the former rear stalls.

In 1996 it was leased to the independent Robins Cinemas chain and they re-named it Robins Cinema. It closed on 2nd December 1999 when the new Cineworld multiplex opened across the road on the former Middle Brewery site.

The building stood empty and unused for 14-years. In December 2007 it was given a Grade II Listed building status by English Heritage.

Articl from the Derby Evening Telegraph

Scores of objections over plans to demolish most of a former cinema have been lodged.

Developer Square Peg Investments is behind the proposal to knock down the former Robins Cinema building in Guild Street, Burton.

But more than 15 letters opposing the plans have been sent to East Staffordshire Borough Council along with objections from the Cinema Theatre Association and The Theatres Trust.

The developer has applied to the authority for conservation area consent so it can knock down the cinema building, but keep the former 1867 opera house facade.

Square Peg Investments has also submitted a separate planning application to build a four-storey building, containing 30 apartments, on the site.

Planners have recommended that both applications are refused. A final decision will be made at a meeting on Monday.

The building is currently being converted into a restaurant and nightclub. The ground floor and the former cafe' are to be come restaurants accessed from the Guild Street entrance.The nightclub is being built in the circle area of the cinema,this will be accessed from a new entrance that will use the original Façade at the rear of the building and use the stage area.

Any original plaster work that will be on show is to be repainted. The plans show some of the plaster work will be boxed in.I have included some photos of the ongoing work.

As at December, 2018, the cinema has re-opened as the Purrocious cat café and lounge, with a separate feline free dining area. There is also a craft experience area. Entrance is free but customers are advised to book one hour slots if wishing to meet cats who will not need to see in the dark so much in these circumstances.