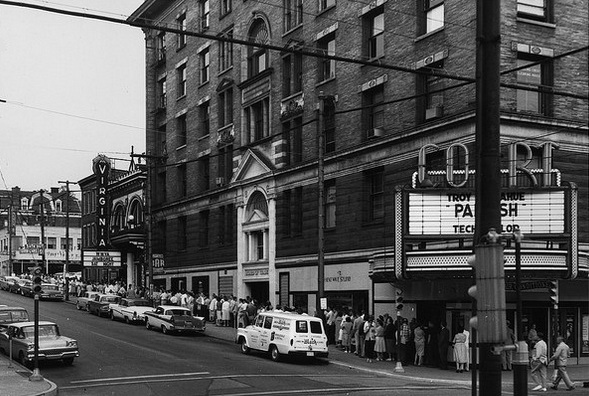 Opened in 1901 as a legitimate theatre, the Court Theatre, was located in the Board of Trade Building. The theatre was designed by architect Edward Bates Franzheim, a Wheeling native. By the late-1930’s, the Court Theatre was converted into a movie house. It operated at least into the early-1950’s. Any additional information on the Court would be appreciated.

What a beautiful photo of the lobby! I wonder what its current condition is.

The April 9, 1938, issue of The Film Daily said that the Court Theatre in Wheeling was to be modernized throughout. The work was to be completed by June 10.

The remodeling is briefly mentioned in a reminiscence about Wheeling’s theaters by Earl Summers, Sr., who had been concertmaster at some of the early houses, including the Court (published in the Autumn/Winter, 1982, issue of Upper Ohio Valley Historical Review, which is available as a PDF here.) Summers says that the Court’s original large stage was greatly reduced to accommodate more seating, so the house was no longer able to present the live road show productions it had once hosted.

Sadly, the 1938 remodeling probably also did away with the original design of the elegant foyer seen in this 1904 photo. I’ve never seen photos of the auditorium, but if it was a good as the foyer it must have been splendid.