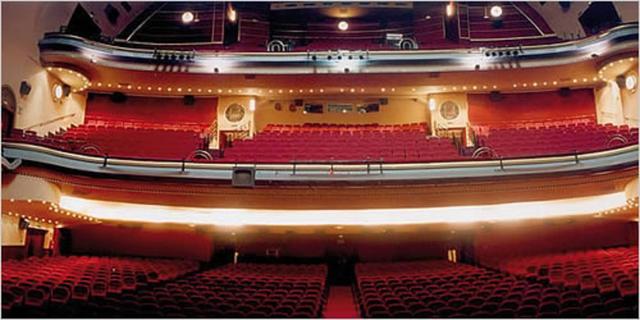 The Cine Coliseum was built on the Gran Via, from 1931 and opened on 10th December 1932 with the film “The Champ” starring Wallace Beery. The architects were Casto Fernandez Shaw and Pedro Muguruza Otano who designed a splendid cinema/theatre that had seating for 1,740 in orchestra and two balconies. The theatre was owned and developed by the famous composer of zarzuela, Jacinto Guerrero. Zarzuelas like "El Huesped del Sevillano" and "La Blanca Doble" were presented.

Only much later did the theatre end live shows and become a full time cinema, particularly appropriate since Guerrero also was a founding member of an organization organized to produce and distribute Spanish films. The projection booth was located at the rear of the first balcony and contained four projectors, two were for showing 70mm film and two for regular 35mm film.

By the early-1990’s the theatre was listed as having 1,562 seats. My notes indicate 1,533 seats in 1997. I counted on the main floor 20 rows of 10 seats, aisle, 10 seats, aisle, 10 seats, aisle, 10 seats. I estimated the screen was 35 to 40 feet wide. A red curtain was used. Though they were not lit up, I could see two murals. As the credits were running, I was standing, the only audience member remaining in the Cine Coliseum, admiring the gorgeous decor. The usher asked in Spanish if I liked ("gusta") the theatre. I did, indeed. I also enjoyed the film I saw that day, October 27, 1997, "The Chambermaid of the Titantic"

The Cinema Writers Circle Awards, Spain, was hosted in the Cine Coliseum in 1996 and 1998.

The theatre has returned to live theatre use. In 2001 the theatre was purchased by Stage Entertainment of Amsterdam. The theatre’s owner purchased a building at the rear on Calle De San Ignacio De Loyola in order to expand the theatre’s stage-house. In 2001, commemorating the 50th anniversary of his death, there was a show of the best works of Jacinto Guerrero. Andrew Lloyd Webber’s musical "Cats" began December 17, 2003 and continued into 2005. This was followed by a production of “My Fair Lady”. The theatre was remodeled and redecorated for the musical "Victor/Victoria" which ran from September, 2005 into 2006. Mel Brooks musical comedy "The Producers" premiered September 14, 2006 and closed May 6, 2007. Disney’s musical "Beauty and the Beast" began a 6 month run on October 4, 2007, apparently interrupted by a concert schedule with singer Rufus Wainwright (November 12) and Sigur Ross (November 21). A recent production was “Mama Mia”.

I saw the Spanish premier of the stage version of ‘Victor/Victoria’ here 2 years ago and it really is a great theatre with a lovely atmosphere despite its size.

The theatre is owned by Batista Soler and leased to Stage Entertainment as is the Lope de Vega accross the street.

the orchestra is on a hydralic lift, one of the few in Madrid, and takes 3 min. to reach stage level.