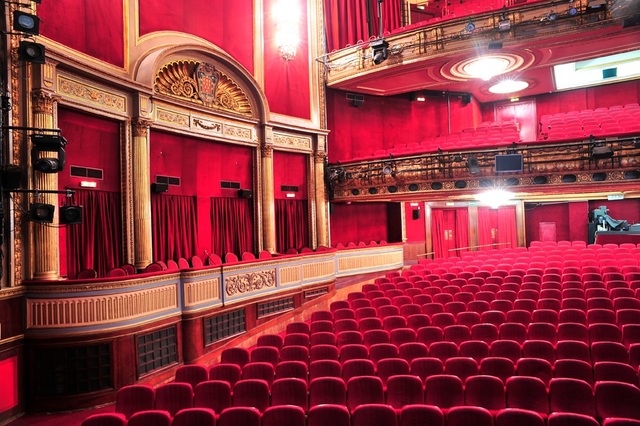 The Teatro Lope de Vega was built from 1946 to 1947 and opened on 16th April 1949 with a live show. Seating was provided in orchestra level and two balconies. Lyric shows and Spanish Folklore musicals made the Lope de Vega one of Madrid’s showplace theaters. Popular artists, as famous as Juanita Reina, opened their shows in this theater. From 1966 it was renamed Cine Lope de Vega when it converted to cinema use.

By the early-1990’s, the capacity of the cinema was 1,557 seats. On March 19, 1995, I saw the French epic movie "La Reina Margot" (Queen Margot), which depicted a rather bloody European history. A curtain rose up before the huge movie screen, which I estimated at being 40 to 50 feet wide. The theatre was very ornate and pretty. The Lope de Vega hosted in 1997 the Cinema Writers Circle Awards, Spain.

The Lope de Vega returned to its origins as a showplace legit theatre in 1997, with 1,496 seats. The owner of the theatre purchased a building at the rear of the the building on the Calle De Isabel La Catolica in order to expand the theatre’s stagehouse. When I visited in October 1997, "Man of La Mancha" was presented, and that was still running a year later. "Beauty and the Beast" ran in 2001. The musical "Phantom of the Opera" finished a 20 month run on June 20, 2004. By April 2004, Phantom had played 700 shows, to over 700,000 spectators; profits from the 700th show were donated to children affected by the March 11, 2004 Madrid train bombings. Blockbuster shows have included "Mama Mia!" (opened November 11, 2004) and "Jesus Christ Superstar" (premiered on September 20, 2007). In 2011 a production of Disney’s “The Lion King” began a successful run (still running in 2017). Currently the second largest legit theatre in Madrid, the theatre is owned by Stage Entertainment of Amsterdam.

The theatre is owned by Batista Soler and leased to Stage Entertainment as is the Coliseum accross the street.