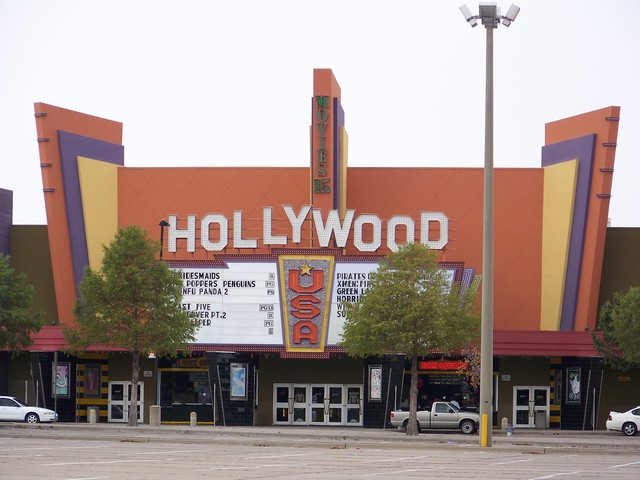 I remember when this theater opened. It was, I think, around 1993 sometime. I spent the summer of ‘94 riding my bike down to it to watch every movie they’d let me into. I ended up seeing Forrest Gump 6 times that year. They were a pretty good theater but like most built in the early 90s they didn’t look ahead to stadium seating which I think ultimately cost this place since now it is a Dollar show. The Galaxy 10 (9 when they opened in 95) across the highway had the stadium seats. Still on occasion I’ll go watch a movie here and I am impressed that they have digital projector or 2, show 3D, and for the most part have kept it up. But nothing will ever be like that summer in '94.

I thought it was cool that each theater had a celebrity picture at the entrance like such and such was this theater. The only ones I remember off hand were of the 2 biggest screens. Theater 4 was the John Wayne theater, and theater 12 was the Humphrey Bogart theater. And the halls are lined with lots of posters of old movie stars. My favorite is still the Sinatra one at the top of the ramp and to the right, first one on the left. Always said if that one ever closes I’m gonna go wheeling and dealing for it.

They’re all over every Cinemark of a certain era, probably starting with the Hollywood concept.

For more than 35 years, Garland residents could enjoy drive-in movies at 3159 S. Garland Road. But as the home video era came into being, it was out with the Apollo Drive-In and in with the Wal-Mart 24-hour concept store, the Hypermart which opened at the former drive-in’s spot in 1989. But less than a mile away, movie lovers of Garland were delighted when a 60,000 square foot, 15-screen behemoth known as the Cinemark Hollywood U.S.A. was announced in 1992 just off of I-635 and Shiloh Road. Groundbreaking took place on June 11, 1992 with Cinemark mascot Front Row Joe, Garland’s Mayor Bob Smith, and others. The city teamed up with Cinemark to combine forces on a massive 800-space parking lot which would be used by Dallas Area Rapid Transit (DART) users during the daytime and moviegoers by night. The fact was that nothing was small or understated about the Cinemark Hollywood U.S.A. as it would become the largest megaplex outside of California when it launched at the end of 1992.

The theater opened on December 18, 1992 playing “Home Alone 2” as the first of 14 features. Its lobby featured neon palm trees on the west, a massive concession area, a neon Sunset Boulevard street sign over the arcade, and a Mama Rugi’s pizzeria with large seating area. There was also a 7’-by-7’ (3 monitor by 3 monitor) video screen featuring trailers and live video. That monitor wall would be about the only casualty over the first 30 years of the theater’s operation as the theater remained remarkably consistent (other than two interior concession stands which were retained but not used for many years).

Nothing was subtle in the purple, green and orange color scheme inside or the well-lit ticket area outside which was trying to conjure up Hollywood’s past with homages to Marilyn Monroe, Betty Grable, Sunset Blvd. with Gloria Swanson, James Dean, Marlene Dietrich among them. Inside, lit frames of classic Hollywood stars were found next to the entrances of the theaters including theaters dedicated to Bogey and the Duke. But on opening night, people were blown away by the talking Front Row Joe trash can which had a variety of random phrases when trash was dispensed with. 23 years later, the trash can amazingly was still around though Joe’s trash-talking were apparently behind it.

The first competition for the USA came on May 21, 1996 when United Artists opened its superior Galaxy just an exit or two to the west of the Cinemark theater. The two battled it out for the best clearances for the next ten years. But with its six THX-certified auditoria — two with 80' screens — the UA Galaxy was a destination complex. More competition came in March of 1998, the mega-large AMC Mesquite 30 opened to the south also along I-635. With all stadium-seating, the megaplex was draining business from both Garland theaters.

Then in 2005, Garland got the high-tech AMC Firewheel 18. The Cinemark Garland was aging quickly as superior theaters were easily reachable via highway and the circuit finally decided to downgrade the theater after 15-years of first-run service to a pretty awesome sub-run discount house. The theater would temporarily drop to just 14-screens as the theater leased out theater one to a non-profit house of worship. It would also try Spanish-subtitled American films for a period to reach the fast-growing Hispanic population in the area. Both concepts didn’t work out and the theater continued as a mainstream dollar house into the mid-2010s. Its biggest change came when the theater was able to make the conversion from scratchy second-run 35mm prints to all-digital projection allowing for 3D exhibition and better quality presentation. While many early 1990s theaters had changed hands or closed altogether, the Cinemark remained vaiable as it neared its 25th anniversary.

The Cinemark Garland closed for the COVID-19 pandemic on March 15, 2020 showtimes. During the pandemic, the vast majority of discount movie theaters were closed permanently. Almost remarkably, the Cinemark in Garland returned with discount movies beginning on June 11, 2021 after being closed 15 months.

This theater is now permanently closed

The era of the dollar house multi/megaplex ended in Texas and the South with the closure of this theatre. The Silver Cinema in Denton’s Golden Triangle was the only other sub-run discount venue remaining in the State but they opted to switch their policy to first-run features. Give Cinemark loads of credit for reopening it at all in 2021 - it seemed like such a long shot. Once it reopened, the product was challenging to find for a 15-screener and the customers simply didn’t turn out.

It looks like they may have saved one year of leasing by surrendering after 29 years minus two days closing on December 16th, 2021. I’ve placed a number of shots in photos from December sensing the imminent demise of the Hollywood USA. It will be missed.

Having been a General Manager of three of those type theaters; GCC Valley View, Trans Texas Medallion 5 and Trans Texas Ft Worth Dollar Cinema 8. I say good riddance. All three locations were run on the cheap by their owners. And GCC would not fix anything. I wish that I could go back and erase 1990 to 1994 from my history.