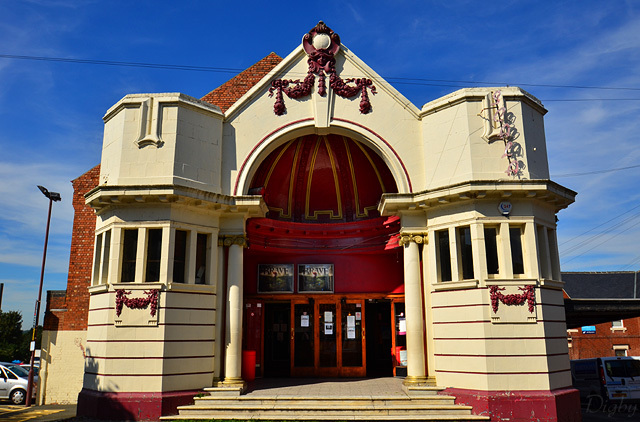 The Scala Picture House was built on the site of a graveyard and opened on 4th September 1913. It is located on the corner of Pimlico and Burns Street, adjacent to the Market Place. It is one of the most significant and important cinemas to open in Derbyshire.

The architects were Parsons & Sons of Bulwell, Nottingham and the building cost Â£5,000 British Pounds to construct and fit out. The facade is covered in Hathern terra-cotta which is decorated in the form of swags and scrolls and is made up of two wings that extend out between a high arched entrance in the centre. Inside the auditorium there were 900 seats in the stalls and 100 in the circle (today those figures are greatly reduced). There was a seperate entrance and paybox on Burns Street for the front stall seats. The building has been virtually unaltered since its opening.

More images – inside and out – here:–

I have uploaded some photographs of the refurbished auditorium of the Scala. The cinema was refurbished in time of the cinema’s 100th anniversary in September 2013. And is believed to be 2nd oldest cinema in the UK. New seats, carpets, screen, digital projection, speakers and catering/box offices stands have been installed.