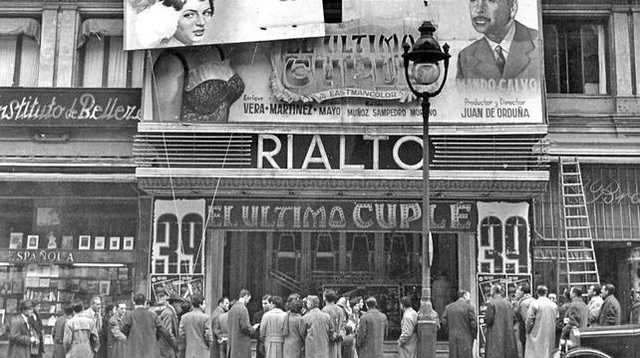 The Cine Rialto was built in 1926 designed by architects Jose Aragon Pradera & Jose Maria Mendoza y Ussia and modelled in a Neo-Classic style after the Roxy Theatre of New York City. The Cine Rialto opened October 17, 1930 with a selection of Paramount movies with sound. Seating was provided for 1,500 in orchestra and two balconies. Between 1932 and 1934, the cinema was named Cine Astoria. On May 6, 1957, the Spanish movie “El Ultimo Cuple” was shown.

In the early-1990’s, the Cine Rialto had a capacity of 1,352 seats. The auditorium’s original proscenium had been altered, and curtains stretched across the stage in a "wall to wall" fashion. On March 12, 1994, I enjoyed "The Three Musketeers" dubbed into Spanish at the Cine Rialto. The palatial Cine Rialto had a full house that Saturday evening. I estimated the screen as at 40 feet wide for ‘scope films. The curtain was opened and closed. I returned October 22, 1997 and saw "My Best Friend’s Wedding" dubbed into Spanish as "La boda de mi mejor amigo" and counted on the main floor 21 rows of 17 seats, aisle, 17 seats. The ornate foyer had columns and marble. The auditorium’s ornate decoration included decor that included windows, which looked as though they could have been backlit at some-time, but probably never were. Surround sound was used and a red curtain was used. A sign outside proclaimed "Hindrante 70mm" The local exhibitor Movierecord operated the Cine Rialto. Because it was Wednesday, the ticket price was discounted from 750 pesetas to 525 pesetas.

Though the Spanish and French movies that I saw drew few people into the Gran Via cinemas, the dubbed American hits filled the cinemas and so again the Cine Rialto had a full house. Watching films on a huge screen with a great sound system is always good - but doing so with more than a thousand fellow moviegoers is even better - and enjoying movies in a gorgeous regal movie palace such as the Cine Rialto was fantastic!

In 2002, the Cine Rialto was purchased by business people who spent 4 million euros on renovations, including restoring the backlights to the foyer’s stained glass ceiling. It reopened on 5th April 2005 as a legit theatre, the Teatro Rialto Movistar, with 1,200 seats and the musical "Hoy No Me Puedo Leventar" ("Today, I Cannot Lift") which has run so far for 3 seasons. The theatre’s commercial sponsor, Movistar, is a subsidiary of Telefonica. Previously, Spain did not have a custom of naming theatres after commercial sponsors. By 2017 it had dropped the Movistar tag.

Clicking on El Teatro at the official theater website linked in the theater’s introduction, and on the various links on the left at El Teatro, provides various photos of the Rialto’s vestibule lobby, foyer, auditorium, and renovations.