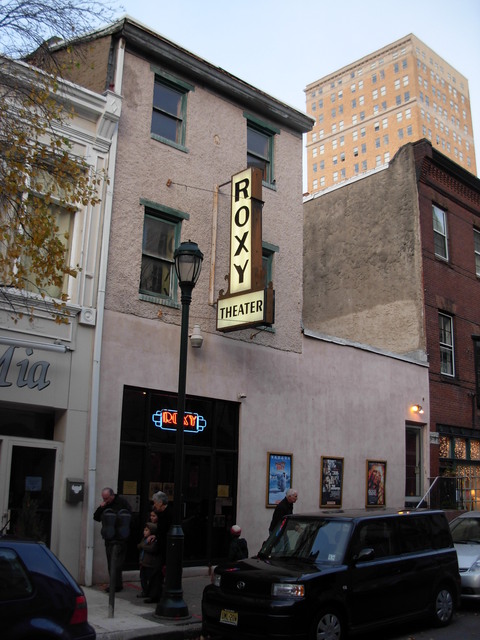 The 1916 Sanborn Map shows ‘Motion Picture Film Testing’ on the 3rd floor of 2023 Sansom Street. In 1927, in this building, a model 20-person atmospheric auditorium was installed on the 2nd floor by electrical contractor Samuel & Elias Nusbaum, who worked on many movie theatres and were based in the building. A 1930 photograph showed a ballet rehearsal on stage. Pocket Playhouse opened as a live theatre in 1968 or 1969. In October 1969 it opened as the Underground Cinema 16, presenting 16mm films, but this was closed after two weeks for not having permits. From 1969 to 1970, Philadelphia’s world famous architect Louis Kahn drew plans for a super modernistic redesign, with a façade that would have included a pair of giant speaker horns, and a new interior, for the Raab Dual Movie Theatre, but this rebuild did not happen.

By January 1970 it had reopened as the Underground Cinema. In June 1970 it was renamed Aarde Cinema and began to screen adult movies, sometimes straight, sometimes gay. It closed in October 1973.

It was renovated and reopened in February 1974 as the Academy Screening Room, presenting arthouse and revival movies and closing in 1976. It became a nightclub named Club Hippo which was damaged in an arson attack.

The Roxy Theater opened in May 1982 as a single screen seating 120 and programs Art House/Independent movies. A second screen has now been added.

In 1994, theatre owner Max Raab filed an antitrust suit against Miramax Films, alleging the studio allowed only Center City Philadelphia’s Ritz theatres to show first run movies. In October, 1994, the Roxy Theater closed. Two nearby movie theatres also closed in 1994 - the Eric Rittenhouse 3, which was demolished and Sam’s Place I & II, which became a CVS Pharmacy.

Bernard Nearey purchased the theatre in October, 1996 so moviegoers would have more another choice. On February 7, 1997, the Roxy Theater was reopened with “Secrets and Lies” and “Hype”. The Roxy Theater shows arthouse, classics, and mainstream films.

In September, 2012, the Roxy Theater closed, as the landlord terminated Nearey’s lease. The Philadelphia Film Society signed a 16-year lease, to show more art films, and refurbished including new screens, seats, surround sound and digital projection in addition to 35mm projection. The Roxy Theater reopened December 20, 2013 with “Saving Mr. Banks” on one screen and “The Wolf of Wall Street” to start the following week.

Closed in March 2020 due to the Covie-19 pandemic, it was announced in April 2021 that the Philadelphia Film Society would permanently vacate the Roxy Theater and would instead reopen the 5-screen Ritz at the Bourse in Center City, which Landmark Theatres had vacated.

December 21, 2012 Washington Post article about the closure of Takoma Park video store owned by Annie and Barry Solan states the two met in 1975 at the State which Barry described as a “raggedy old vaudeville theater.” The article states that in 1979, Barry became a co-owner of the State where he screened films such as “The Rocky Horror Picture Show” and “Our Hitler” an 8 hour movie. After they married in 1981, he bought other theaters including Philadelphia’s Roxy before entering the video business.

Saw workers inside the Roxy the other day,in the near future, I am planning to donate money to the new owners, PFC, they should sell Roxy T-Shirts as an incentive.

Looks like work has stopped for now, was supposed to open last May. This would have been a good venue for the silent Hitchcock 9 film retro. If I were working, I would give more money to get this open.

Will the ROXY be open in time for the Philadelphia Film Festival?

October 18, 2013. I went to the open house for the ROXY. I am looking forward to it’s reopening. Full handicap access. It’s smaller in seating and the brick wall lobby is lost due to the new digital projection. One 35mm projector is in the smaller theater. New seats, new bathrooms and consession stand.No more leaking ceilings and musty smells, and the movies will be better, with NYC Film Forum type programing, can’t wait!

I jumped the gun, it’s still being worked on.

The original address for the Roxy’s first screen was 2021 Sansom. The first theatrical use of that building appears to have been as The Pocket Playhouse, presenting live theater in 1968-69. An October 1969 opening as “Underground Cinema 16” (as in 16 mm) ended abruptly after two weeks when it was shut down by the city for not having permits. By January 1970 the theater was open and advertising as Underground Cinema. Barney Sackett took over the operation in June 1970 and changed the name to Aarde Cinema, initially with some arty pretensions but shifting to adult films. The Aarde ran porn, sometimes straight, sometimes gay until October 1973. After a renovation the venue reopened as the Academy Screening Room in February 1974 with the documentary “I.F. Stone’s Weekly.” The Academy operated with an art/revival policy into 1976. A 1979 Inquirer story about a bank fraud case mentions a nightclub called Club Hippo at the 2021 address and says it was destroyed in an arson fire, but is unclear on dates (per the story a loan to fund the club was supposedly granted in 1974). The Roxy began advertising in May 1982 and by January 1983 had been taken over by the operators of South Street’s TLA, who began advertising the Roxy as TLA Roxy Screening Room.

i hope someone saves the Roxy! fond memories here

What is the Roxy Theatre about?