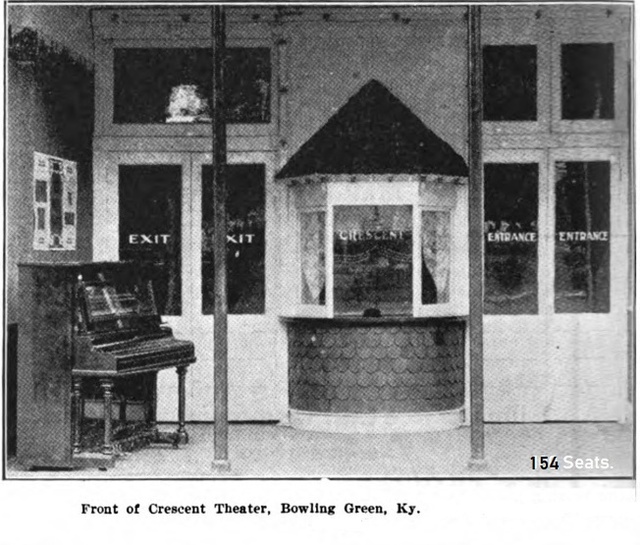 First Manager: August J. Winkenhofer Sr. Theatre owner was out of Evansville, IN. The Crescent Theatre was opened by 1914 when it was operated by the Crescent Amusement Company.

In ‘67 the building that was the Crescent was supposedly occupied by the Consolated Loan Company.

From: Me
To: local Historian at the local museum.

I’m interested in the history of local cinema here in Bowling Green. In searching for the local paper article concerning the opening of the Martin Theatre in Bowling Green Mall, I came across a bank advertisement concerning the location of the Crescent Theatre as being on Park Row. I was talking to an 84 year old youngster who spent his life here in the area. He remembers The Princess, Capitol, and Diamond (later the State) but nothing else on the square. He called an equally young lady (92) and she remembered only those other three as well. The 1967 ad stated that the building that was the Crescent was currently occupied by the Consolated Loan Company. The gentleman gave me your name as a contact as he and his son had taken a ‘History of Bowling Green’ class taught by you a while ago. Do you know if the Cresent Theatre was on Park Row, or if not, where it might have been?

Bowling Green’s early theatres —Diamond, Capitol (originally called the Columbia), & Princess— belonged to the Crescent Amusement Co that had its offices at 416 E. Main from about 1911-1960. All but the Diamond were on Main St. I checked the city directories 1911-1967 and found no theatres on Park Row and no theatre listed as the Crescent Theatre—which makes me wonder if the Capital/ Columbia, was sometimes referred to as the Crescent because of its ownership. The city directory lists Consolidated Loan at 410 Park Row.

I went to the square. Park Row is odd #’s only. At 411 there is an unassuming 2-story brick building housing some financial business. Across from it on the square at 410 E. Main ST is a 3-story white brick building sharing a wall with the Capitol.

No photos of this Crescent Theatre?

There are two possibilities here given the vague and contradictory information. There was a theater at 411 Park Row on the 1909 map. That building, which is still there today, was built before 1886, and had been a saloon in 1901. It’s a dry goods store on the 1914 map.

The other possibility is that this was the theater at 416 E Main, which appears in an old storefront, again a pre-1886 two-story brick structure. This is shown on the 1914 map. It had been a grocery in 1909, and by 1921 had been demolished and replaced by the Capitol.

Given the ‘Crescent’ link, and the fact that the original Capitol is shown on the 1925 map to have an office on the west side, I think the most likely address for the Crescent was 416 E Main.

The 1914-1915 American Motion Picture Directory lets us down on Bowling Green, listing only two theaters, though the town must have had more. But one of the theaters is listed (with no address) as the “Crescent Amuse Co.” and the other is listed at 416 Main Street with the name Columbia Theatre. The Columbia is the house that was renamed the Capitol Theatre in 1921. The Columbia was taken over by the Crescent Amusement Company in 1911, so it’s possible that the AMPD simply double-listed the same house under the theater name and the name of the operating company. It’s possible that Bowling Green never had a theater called the Crescent.