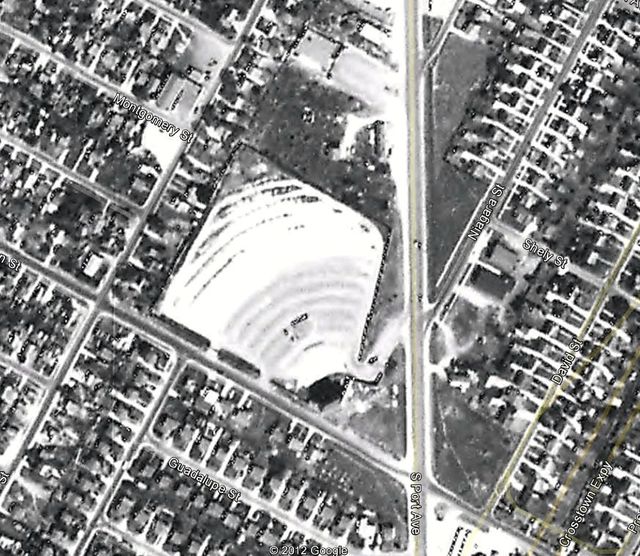 The Buccaneer Drive-In opened in 1952. The original owner was Arnulfo Gonzales. The architect, according to Boxoffice of January 24, 1953, was Beverly W. Spillman Sr., of Spillman & Spillman in San Antonio.

Spillman was for a time a member of the advisory board or the Modern Theatre Institute, and though he is frequently mentioned in Boxoffice I’ve only been able to pin down one other theater he designed that was completed, that being the former West Theatre at George West, Texas.

At 4038 South Port (where the Home Depot is now) used to be a even bigger drive-in. Barely visible in the early 80’s.

1961 Google Earth shows a total of at least 9 drive-ins, a couple are twins. Lots of Drive-Ins for that town.

Although this theater opened in 1952, it did not advertise along with the other Corpus Christi drive-ins in the Corpus Christi Caller-Times until June of 1961. Perhaps because it was the first Spanish language operation or because it was a non-union operation. The Buccaneer was the target of several dynamite explosions from the time it was being constructed in early 1952 and over the next few years before Corpus Christi police in 1955 arrested several projectionists from the IATSE Local 604 in connection with the bombings. Is it just a coincidence that dynamite was used in the construction of drive-in theaters? A 50s article about Victoria’s Lone Tree drive-in opening talked about how dynamite was used to quickly make the holes for the hundreds of speaker posts. They used the already laid speaker wires to detonate small charges of dynamite creating the perfect holes for the posts. Interesting. I bet the drive-in construction was also a union deal back then.

Some pictures and ads….
View link

Check the link later for more details to come.

Some images, ads and articles.