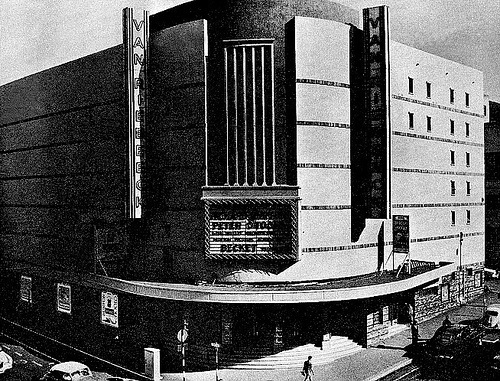 The Van Riebeeck Theatre was situated at the corner of Long Street and Riebeeck Street, Cape Town. It was built in 1951 by the 20th Century Fox organisation.

The seating in this luxury cinema was accommodated in stalls and circle sections. It was the last of the large auditorium cinemas to be built in Cape Town’s downtown theatreland. It was first cinema in Cape Town capable of the 70mm Todd AO projection process with enhanced multichannel sound for the Mike Todd productions of the mid-1950’s.

The Van Riebeeck Theatre was named after Jan Van Riebeeck the Dutch Commander, who landed on the shores of Table Bay in 1652 almost exactly 300 years earlier, to set up a refreshment station for passing sailing ships of the Dutch East Indies Company.

In the early-1970’s the theatre was renovated and altered to a two screen complex and renamed Kine 1 and Kine 2. It was then part of the Ster-Kinekor chain.

This complex closed in the early-1990’s and the building was demolished. An office block housing an insurance company has been erected on the site.

THIS THEATRE WAS NEVER OPERATED BY THE FOX THEATRE CHAIN.

20th Century Fox and the Fox chain of theatres are seperate companies. 20th Century Fox is a film production company, they may have some interest in the theatre you are speaking of, but they have nothing to do with the Fox chain that operated here in the US. In fact, the original Fox chain sold to National General Theatres in the very early 60’s, later to sold to Mann Theatres in the mid 70’s. There has not been a Fox operated theatre since the early 60’s, yet 20th Century Fox Film Corp still is alive and well to this date.

Here in the UK, 20th Century Fox (the film production company) operated the Carlton Theatre, Haymarket, London, the Rialto Theatre, Coventry Street, London and the they built the Drake Cinema, Plymouth, Devon(Later taken over by Odeon). In a former Commonwealth country like South Africa, it is conceivable they built and operated the Kine 1 & 2.

Fox Films and theatres were part of the same co in the US until the Govt. made all motion picture companies divest of there theatres. This included Paramount, Fox, MGM and RKO. This was done in the 60’s. This sdid noy affect overseas territories at that time. They all built and operated there own theatres to display there studio product overseas. Fox sold to NGC. Paramount , MGM and RKO to local theatre operators.

hi..does anyone know where i can get some infos about who worked in “van riebeeck cinema” in the 60s.

I stand under correction, but the cinema was twinned well before the early 1980’s. During the early 1970’s, the cinema was the host of the Kinekor Kiddies Klub which used Kine 2, the former dress circle of the Van Riebeek. This was a highlight for kids of Cape Town as admission included a complimentary comic book and the session included a cartoon and a serial. I distinctly recall seeing front of house display materials for Zardoz which would place that around 1974. I also recall seeing Breakheart Pass in Kine 1, that would have been in 1975. Both screens were very impressive, the rake in Kine 2 was particularly pronounced allowing for an exaggerated stadium seating long before this was the norm. The former stalls in Kine 1 resulted in a relatively flat auditorium, but a very impressive one none the less.

I do agree with your comment that the cinema was twinned during the early 1970’s and not the early 1980’s.
Thanks for the correct info.