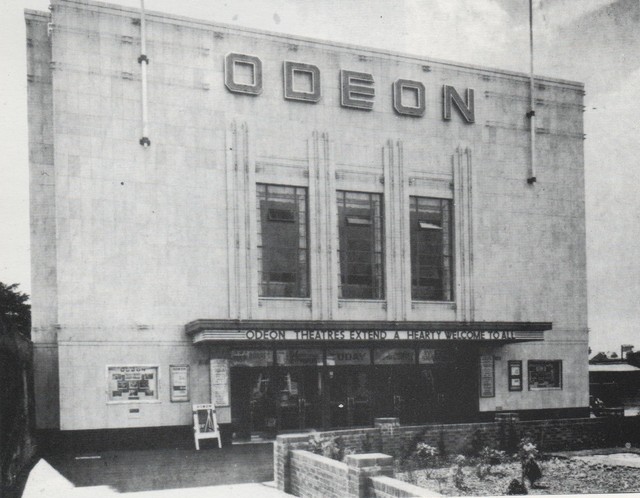 Located on the High Road, Brentwood, Essex. The Odeon was built on the site of a 13th-Century chapel and retained the remains of the chapel gardens as a decorative feature in front of the new cinema. Built for Oscar Deutsch’s Odeon Theatres Ltd. chain, the Odeon opened on 18th May 1938 with Barry K. Barnes in "Return of the Scarlet Pimpernel".

The facade of the building was rather plain and was covered in cream tiles, broken-up with three large windows that were outlined with pilasters. These windows allowed daylight into the circle foyer which had a large ring of Art Deco lighting in the ceiling. Inside the auditorium, seating was arranged for 920 in the stalls and 430 in the balcony. There were decorative Art Deco style bands along the side-walls which contained hidden lighting and the ceiling over the front stalls had a large round circular light fitting which was flush to the surface.

The Odeon was never altered during its life and was closed on 20th April 1974 with John Phillip Law in "The Golden Voyage of Sinbad" and Jamie Uys in "Lost in the Desert"(Dirkie). It was taken over by Brentwood Council under a compulsory purchase order and demolished immediately to enable the Chapel High Shopping Centre to be built (today known as the Bay Tree Centre). A purpose built twin-screen cinema was incorporated into the new shopping centre which opened as the Focus 1 & 2 in 1974.