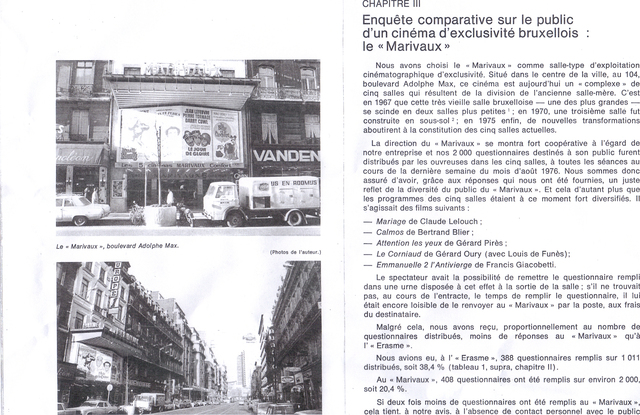 Originally opened in 1924 as the Theatre Marivaux, named after the French 17th Century playwrite, a contemporary of Moliere. The theatre is located within a building on Boulevard Adolphe Max in the centre of Brussels. It has the auditorium located upstairs on the second floor. Seating was provided for 1,098 in stalls and balcony and second balcony levels.

Around 1913 it was converted into a cinema by the Pathe Film Company and re-named Pathe Baby Cinema. From 1941 until 1943, it came under German control and was in use as a Solatenkino, for the use of the occupying army. It was re-named Marivaux Theatre again from 1944.

In 1967 it underwent alterations. In 1972 it was converted into four screens and in 1973 a fifth screen was added in adjoining space. Two more screens were added in 1976.

The Marivaux Cinema closed in 1992 and was in use as a film studio when the Cinema Theatre Association visited the cinemas & theatres of Brussells in September 1995. There was talk at that time that the Marivaux may re-open for showing films in 1996, but this never happened.

After a period of laying empty and unused, it was renovated and converted into a congress center, which opened in early-2008. There are now 1,200 seats in the main theatre and 500 in an adjacent auditorium as well as numerous multi-purpose rooms for 10-200 people. The interior has been designed by interior designer Antoine Pinto.

In recent years the Marivaux, after a long period when it was empty and unused, has been converted to a conference centre. The exterior and front hall seems very tasteful but I was not able to go inside recently, as there was a business conference in progress at the time so I do not know how much adaptation has taken place.