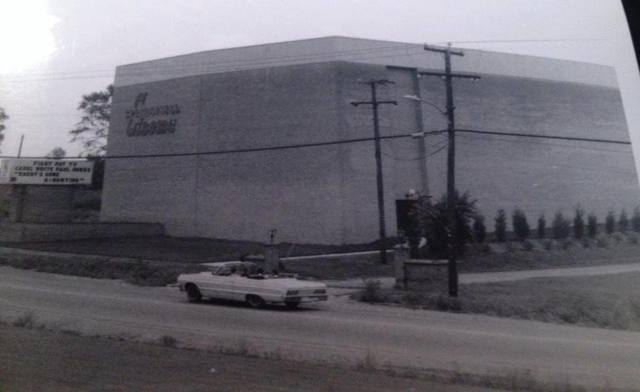 It was later converted into a side by side twin. Part of the Neighborhood Theatres of Virginia chain.

A Circuit City (now closed) was built on the site of the theater.

The SPRINGFIELD opened as a single screen theater with about 1,100 seats, a huge wide screen, and super-comfortable seats. It was outstanding. Later it was divided into twins, but was still a very good theater; preferable in my opinion to the Springfield Mall 10 which is also now closed.

Except for its colonial brick facade decoration, this theater was virtually identical to the Annandale Theatre, also opened in 1964 by the same owner, according to an item in Boxoffice Magazine, July 13, 1964.

The Springfield opened on 11/1/68 with ROSEMARY’S BABY which had just ended a 17 week run at the Embassy in D.C. one week earlier.

This was called “Springfield Cinema” and was the best in the Springfield area. Knowing all of the local theaters as a projectionist and movie buff, I never understood why this had to close, except for the fact that Springfield became such a family community and the parents would rather give up quality for having a Mall theater after shopping. at this time, Springfield Mall was second only to Tyson and a big draw for families.
I remember seeing ‘Pee Wee’s Big Adventure" here, and as I was leaving, I had not noticed a prize when I came in, being a replica of Pee Wee’s bike. What that would be worth today! Dang!
As far as when this opened, I would KNOW that the previous comment about it opening in 1964 is totally false, this was a creation of the early 1970’s and not before ( I realize they may have been referring to when the Annandale theater was built, but wanted to clarify)

View link
Following is text from the above link..
Fairfax County to Demolish Former Circuit City Building to Prepare for Future Park and Ride Lot

Ushered here back in ‘84…..used to call this “Rocking Chair” because it had big padded rocking-back seats. Ran Evil Dead and Rocky Horror as midnight movies…..

Worked at Annandale, and would visit Springfield twin alot – loved the rocking chairs. Both run by NTI (Neighborhood theatres).

Neighborhood Theatres Inc. of Virginia built the “rocking chair” theatre new in 1968. They were a small low overhead (almost no overhead) company and that was a lot of money. (State, Arlington, Annandale, and six other small theatres.) The cinema was always positive cash flow, but I’m not sure it always covered the mortgage. Whatever, Circuit City had a huge growth plan and access to capital when they bought it. I’m sure their offer looked good to NTI. Circuit City kept much of the building during remodel, including a large sign right on Old Keene Mill Road.

The Springfield Cinema was one of three Northern Virginia locations whose property was owned outright by Neighborhood Theatres rather than being leased. The State and Annandale were the other two. Neighborhood Theatres was purchased by Cineplex Odeon in 1986 but the Thalhimer family, owners of NTI retained the property. The lease agreement allowed Cineplex Odeon to operate these locations for two years with a two year option. Also in the agreement was a clause that only Cineplex Odeon could operate the locations as movie theatres. Hence, the Sprinfield and Annandale properties were demolished and the State (building protected by Falls Church City historical designation) became a highly regarded music venue. And now you know, the rest of the story!

Plans for this theater were announced in the September 14, 1966 issue of Motion Picture Exhibitor, though it appears that completion of the project was delayed long past the projected opening date.

“RICHMOND, VA.—Neighborhood Theatres, Inc., announced that a new, deluxe motion picture theatre will be built in Springfield, Va. The location of the theatre will be on a piece of land owned by the company on the south side of Keene Mill road across from the Springfield Plaza Shopping Center. Opening is planned for Easter, 1967.

“The architects for the project are Vosbeck and Vosbeck Associates of Alexandria. The new Springfield Theatre will be of modern design, incorporating all the new techniques of motion picture exhibition. It will be one of the largest houses in the Neighborhood chain, not only in seating capacity, which will be approximately 1000, but also in square footage. The company announced that it plans to use American Seating Company’s Stellar Chairs in the theatre and that they will be widely spaced for patron comfort. Other details of the theatre include a canopy over the drive-in lane to shelter patrons from the elements; a modern, spacious lobby; individual vanities in the ladies rest room; a gigantic 60 foot screen; 35/70 millimeter projection equipment; and a large parking lot.”