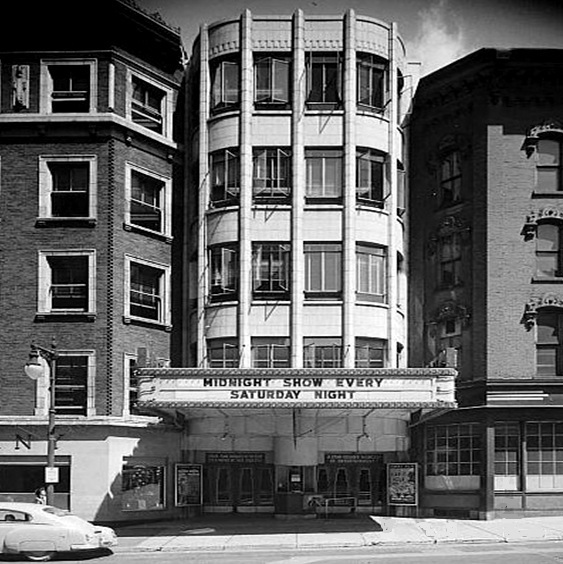 Opened on May 12, 1874 as Powers Opera House, it was designed by Chicago based architect Oscar Cobb. By the 1940’s it was screening movies, known as Powers Theater. In 1892 it was destroyed by fire. It was rebuilt and re-opened in 1893. In 1895 it was renamed New Powers Theater. In November 1901 another fire badly damaged the building and it was rebuilt, to reopen in 1902. It operated successfully as a playhouse until the early-1940’s when it was more dark than open.

It was taken over by John D. Loeks and on November 1, 1944 it was renamed Foto News Theatre and began its career as a movie theatre, initially as a newsreel theatre. It was remodeled in 1948 and was renamed Midtown Theater. It closed on September 20, 1972 and was demolished in 1978 as part of a downtown redevelopment.

“Here is a 19th century view of Powers Opera House: http://tinyurl.com/2e9ysv"
Actually the photo on that site is mislabeled. The facade shown was redesigned in 1914 and the photo should be noted circa 1915. By that date it was know as "Powers Theatre.”

The original building broke ground in 1873 and opened Tue 12 May 1874 as the Powers Grand Opera House.

In 1871 while Edwin Booth’s was playing Luce Hall, Grand Rapids, he learned William Thompson Powers was intending to build an opera house, and before leaving town he wrote a long letter which set forth what was desirable in erecting a structure of that kind. Edwin told him that particular attention should be paid to acoustics, that the seats should be that everyone in the house should have a complete view of the stage, and many other attention to details. Edwin referred Powers to the architect firm of Oscar Cobb and Son, leading architects in Chicago. Powers and the architect toured the great opera houses of Chicago and decided it should be patterned after the new (1871â€"72) McVicker’s Opera House.

Still researching and adding to the timelime. I am a GG grandnephew of William Thompson Powers.

“Blow Up” and “The Boston Strangler” were two films I saw here during my Michigan years.