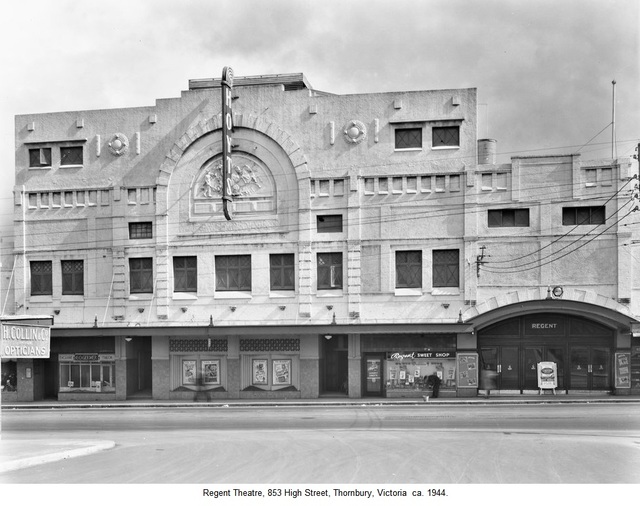 Located in the Thornbury district of Melbourne, this opened as the Regent Theatre on 8th August 1925. It was designed by Sam Millsom who specialised in fibrous plasterwork, although he was not a trained architect. A feature on the façade is a large bass-relief featuring a ploughman and his rearing horses. It was built for F.W. Thring’s Associated Theatres Pty. Ltd. and presented films and vaudeville acts on its large stage. In 1926 it was taken over by Hoyts and re-named Hoyts Regent Theatre. It was equipped with a Western Electric sound system in August 1929. The Regent Theatre was unheated until 1946 when architectural firm Cowper, Murphy and Associates supervised the installation of a gas-fired plenum system and carried out other minor alterations to the theatre. Hoyts purchased the freehold of the theatre at this time.

With the introduction of television to Australia in 1956, cinema attendances plummeted and the Regent Theatre went over to part-time operation, only opening on Thursday, Friday & Saturday evenings. It closed on 24th June 1967 and became a ballroom, named the Cantina Ballroom. In the early-2000’s the auditorium was twinned and the former balcony was converted into a reception hall for weddings and events, named the Midas Reception Hall. In 2010, new owners took over and now re-named Thornbury Theatre, it hosts wrestling matches, live music concerts as well as receptions in the upstairs section which retains original decorative plaster. Unfortunately downstairs in the former orchestra level there is virtually nothing remaining of the original decoration.

A September 2007 photograph of the upper portion of the facade of the former Regent Theatre, Thornbury:
http://flickr.com/photos/vanessaberry/1324310129/

Doing some research on this theatre I discovered from the local newspaper,Northcote Leader,that this theatre opened as the Regent on 8 August 1925.It was operated by Associated Pictures and lists the designers as Millsom Brothers and the builders as S Millsom and Sons PTY LTD.I think Darebin Libraries are getting confused with another theatre which was located a block down the street which I think was called the Thornbury Theatre.

The builders of the theatre, also ran and built the cinema further up the street at 909 High St. They were apparently plasterers and wanted to show their abilities.