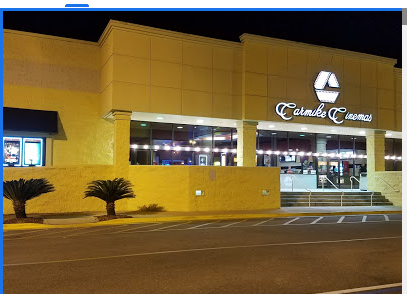 The Carmike 10 was opened on December 8, 1995. This features standard, auditorium-style seating, unlike the Regal Regency down the road. Within the past year, it has adopted Texas Instrument’s DLP g-technology, which presents ALL films via digital download, instead of traditional film projection.

While the outside has a typical cookie-cutter look, the auditoriums feature subtle lighting via half-moon wall sconces and mini-lights in a repeating diamond shape; this, and the mauve-colored walls, help give a welcoming ambience, at once modern and old-fashioned. They have pretty good popcorn, and, typical of Carmike, offer free refills of large sodas and popcorn. It was closed by AMC Theatres in 2019.

Did it ever reopen after Hurricane Michael in 2018?

This opened on December 8th, 1995 with 10 screens, of which 4 were THX certified. as Carmike 10. Grand opening ad posted.

Uploaded a photo as Carmike by Josselyn Pineda.