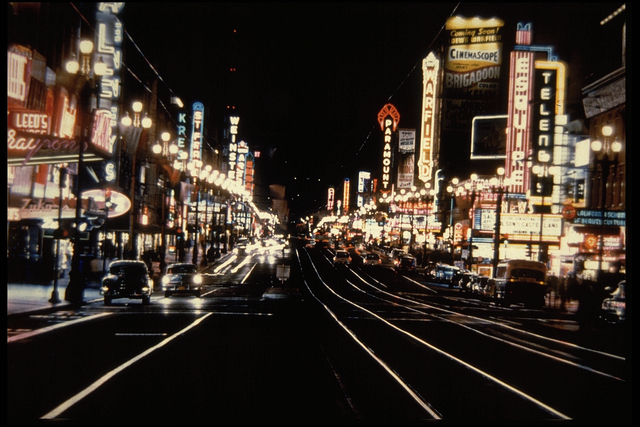 The San Francisco Telenews Theatre on Market Street opened on September 2, 1939, featuring footage of the Nazi invasion of Poland. It was located next to the Esquire Theatre. It was closed in August 1967.

It was demolished in 1972 together with its near neighbors the Esquire Theatre & Pix Theatre, to build Hallidie Plaza and the entrance to Powell & Market BART station

The KTVU archive posted this look at the closing of the Telenews. https://diva.sfsu.edu/collections/sfbatv/bundles/190103 It mentioned it was a travelogue theatre. Chris

The Telenews was part of a national chain of newsreel theaters which flourished particularly in World War II. Indeed, the San Francisco Telenews opened its doors on September 1, 1939, the exact day of the German invasion of Poland, which started WWII. In those days, a newsreel was a standard part of the movie experience. A theater which showed just news and information was not unlike what CNN did on television compared to the network coverages. In addition to newsreels there were short subjects in the one hour program that changed weekly. If one went there at 11am Friday one could have a “twofer”…watch the past weeks show and see the newone for just one price. A box office innovation was a turnstyle at the cashier’s window, saving the cost of paying a ticket taker. During the war the Telenews had a large billboard on the street providing visual coverage of the latest news. Not uncommonly there was a piece of military equipment for the curious. There was a weekly man in the street radio interview also originating at he Telenews; in deed, a young and coming radio personality named Art Linkletter was the interviewer!

There was also a Telenews theatre in Chicago. I actually believe there were 2 Telenews cinemas. One On N.State St which later became the Loop theatre; Which operated until the late 1970’s. Also one on N.Rush St which later became the Carnegie. And then had a major fire in early 1966, But was rebuilt shortly thereafter, And operated until the 1980’s.

This theater had a huge fire that started in the projection room. Sadly an amazing fact is that at one time there were 59 movie theaters on Market Street. Only the Orpheum Theatre now showing plays survives.

I forgot about The Warfield which has rock concerts.

Also the Golden Gate at Market and Taylor with musicals and plays. Run by Shorenstein Hays Nederlander (SHN) – On Your Feet (the Gloria Estefan musical) is currently playing.

In the early 60s I occasionally went into the Telenews theatre. I was in junior high school at the time, and noted it had a very different vibe from the many other theatres on Market street, as it was one of the left over attractions for service personnel during World War 2. By my own era, there were nearly always far more seats than customers. I dimly recall an emphasis on newsreels and travelogues, bare wood chairs, a lack of heating, and less ornamentation on the wall. Despite all that, it had a peculiar magic. Occasionally they would also offer special televised viewings when the big boxing matches came around. And after the Telenews, I’d sometimes go to one of the nearby diners with unusually long counters. These places also had a different vibe, having served hotdogs and sodas even for a few years after the war. There were also more upscale restaurants nearby, and all the kids knew that many of their customers were veterans who had managed to come home after the war.

August 1967 KTVU video report on the closing of the Telenews Theatre.

This opened on September 2nd, 1939. Grand opening ad in the photo section.

Before the fire a local movie memorabilia store owner went into the basement of the Telenews and Esquire and rescued dozens of posters, lobby cards and other memorabilia including reels of film that had been there for years. A lot of the stuff was from old westerns. The owner of the shop told me the story. When the fire occurred in the Telenews it burned with great intensity because of all the film still down there.