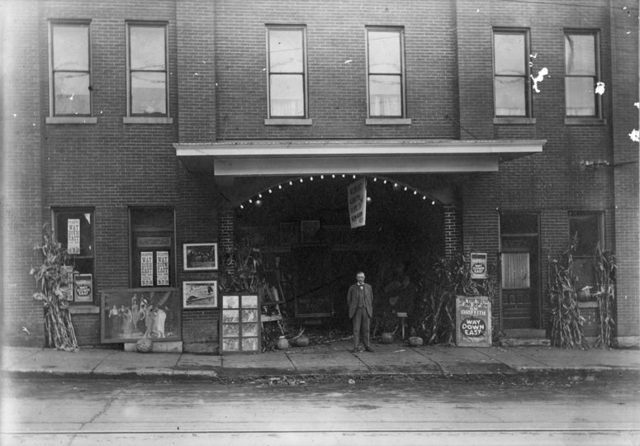 The correct address of the Shelby Theatre was 610 Main Street, according to an article in the July 10, 2013, issue of the Sentinel-News (page 13 of this PDF.) The article quotes local historian Nancy Hill:

“‘That’s when I started to realize that I’d lived here all my life and I suddenly wanted to know more about all the places I’d grown up with,’ she said. ‘Like the old Smith-McKinney drug store, where my family shopped and got our medicine, and like this building here,’ she said, pointing to a photo of an old building of 610 Main St. she had pulled out of her collection. ‘The original structure was the old public stable, it was built in 1903, and then in 1920 it was the BonTon Theater and in 1934, it was changed to the Shelby Theater,’ she said. ‘When I was growing up, that’s where I used to go to the movies.’”

“The theater went out in 1968, Hill said, and the last business to occupy the building was Computer Hawks, which moved after the fire where it suffered extensive smoke damage in March, and 612, 616 and 618 Main Street were destroyed.”The building is currently occupied by a clothing store called The Tipsy Gypsy.

I’ve found references to the Shelby Theatre from 1937, so the name change definitely predated 1945. The photos of the Shelby’s facade look like late-deco, early-streamlined style, so the 1934 name change claimed by Nancy Hill, cited in my earlier comment, seems a likely time for that facade to have been built. It would have been decidedly old fashioned by 1947, when Boxoffice said the house had opened following a fire in 1945.

I’ve been unable to find the Boxoffice item about the rebuilding that was cited by kencmcintyre in the first comment on this house, but a January 12, 1946, item in Showmen’s Trade Review mentions the fire:

“Word comes from Shelbyville, Ky., that the damage caused to the Shelby Theatre and adjoining buildings in the recent fire there, will aggregate $75,000. The theatre was just a year old.”

The claim of the house being a year old was surely an error, considering an item from the October 5 issue of The Film Daily, which said: “The Chakeres circuit has just completed remodeling of the Shelby Theater, Shelbyville, Ky., at a cost of 5,000….” The remodeling, along with the fact that Chakeres actually did have a new theater under construction in Shalbyville in the fall of 1945, probably contributed to the magazine’s confusion. The new Chakeres house was the Burley, a few doors up the block from the Shelby.