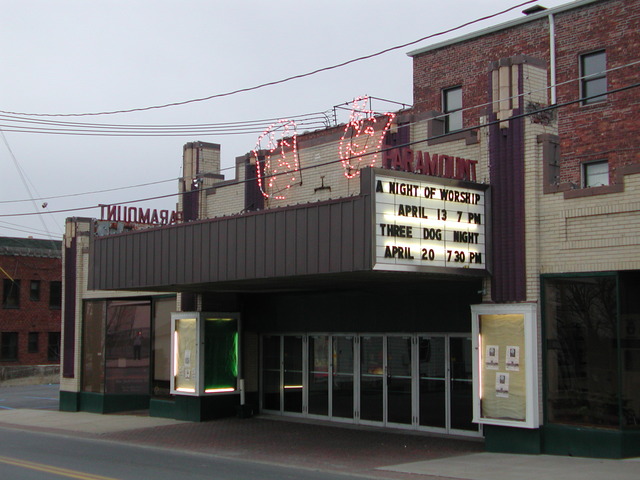 Built in 1930 and opened on June 12, 1930 by the Paramount-Publix group, the Paramount Theatre seated 1,468, and was the home of first run movies in Middletown until 1978 when it was forced to close.

In 1979, Middletown took ownership of the Paramount Theatre and the Arts Council of Orange County subsequently bought the theater from the city of Middletown. The Paramount Theatre was restored and converted into a first rate performing arts center. It reopened in 1985 and has weathered difficult times to continue to bring community events, concerts and shows to Middletown.

Some heavyweights were invited to the opening of the theater on
June 10, 1930:

Adolph Zukor and Jesse L. Lasky, masterminds of the Paramount-Publix corporation, have been invited to attend the Thursday evening opening of the Middletown Paramount theater. It was announced today by Harry C. Stowell, manager. It is not known definitely whether they will be able to appear but other executives of the company, including Martin Mullen, director of the Northwest territory, have signified an intention to participate.

Charles “Buddy” Rogers will greet the first Middletown audience through a specially made talkie film.

The last film shown here was “Semi-Tough” with Burt Reynolds in April of ‘78. I believe the theater was in really bad shape. A portion of the balcony had fallen one night? It did everything to survive in the 70’s-showed Blaxploitation, X-Rated films, karate flicks and mainstream movies. ABC Theaters operated this along with the Orange Plaza Mall Theater.The opening of this theater and the Orange Plaza Mall had a horrible effect on the downtown area.Think the Paramount lost their parking area to a bank at one time. Glad to see it’s still going strong.

The Paramount’s classic movie series continues this Sunday, October 18 with the silent classic “Phantom of the Opera” starring Lon Chaney. The film will be presented from a 35mm print with color tints as well as the Technicolor sequence. Bernie Anderson will be accompanying the film on the Paramount’s Mighty Wurlitzer. Showtime is 3pm.

The 2010 Big Screen Classics By Acclaim series at the Paramount concludes this Saturday 11/20 at 7:30pm with HOLIDAY INN, starring Fred Astaire & Bing Crosby and presented in 35mm. Doors open at 7:00 for pre-show organ music courtesy of the NYTOS Mighty Wurlitzer.

Watch for a new monthly schedule of Big Screen Classics at the Paramount staring in January! Go to www.bigscreenclassics.com for more information.

As of July, the Paramount is no longer under the management of Majestic-Star Entertainment. See this article for more details: http://www.dailyfreeman.com/articles/2013/07/07/news/doc51d8c876aef6c218364984.txt

Grand opening ad uploaded in the photo section for this theatre.

The Paramount has started a classic movie series again. Tomorrow morning at 11:30 they are running The Philadelphia Story, complete with pre-show organ concert. Even though they don’t run 35mm film, the shows should look and sound great as they did install a digital cinema projector for first-run films and a new screen last year.

Middletown used to be home to the annual Orange County Fair. I don’t know if that’s still on the calendar.