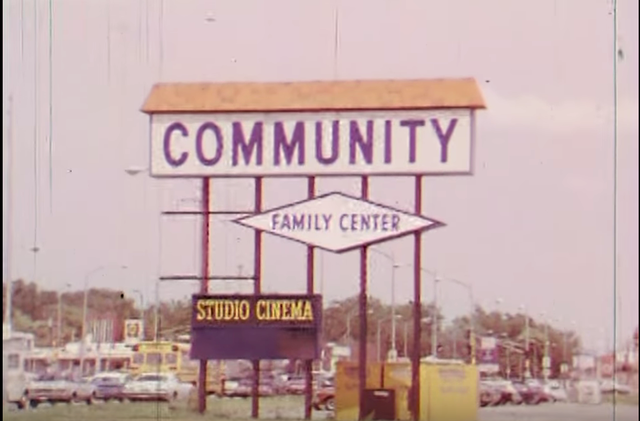 The Studio Cinema was opened April 6, 1962 and closed in 1979. It was demolished soon afterward to make way for the Chicago Ridge Mall.

The theatre was operated during the 1970’s by General Cinema Corporation. It was listed in most of the theatre listings in the Chicago Tribune during the 1960’s and 1970’s, as being in Oak Lawn, the suburb that borders Chicago Ridge, but the address today would be considered Chicago Ridge.

This was a God-awful theater, and none of my family or friends were sad to see it go. It was always run down and dirty, many of the seats were sticky (not just the floors which were typical of most theaters back then), acoustics were horrible, if you could hear the soundtrack at all good luck making out the dialog. Also the management was so cheap they would actually turn off the air conditioning in the middle of the movie during the hot summer days! By the time the film ended we would all be stampeding out the doors to get to the fresh air. One time a friend and I were there and he went to the soda machine, and after putting in his money he gets ice, pop, and cup in that order!

As to the confusion about the location: the Studio was located in Oak Lawn throughout its existence. The Village of Chicago Ridge annexed the area prior to the development of the mall.

Studio might not have been one of the great theaters, but it was popular in the area. There were days when kids could get in for (I think) the “price” of six Pepsi bottle caps. I don’t know how that worked for the theater in the financial sense, but for the blue collar communities the theater served, the price was very right.

Based on the above photo, Studio Cinema was located on the right…about where the Sears Auto Center sits now. To the left was an A&P grocery, and to the left of that was a Community Discount Store. Starlight Drive-In was on the same property behind them, to the south.

This opened as “The most beautiful theatre in the Midwest” on April 6th, 1962. Its grand opening ad with a picture can be found in the photo section.

Seen Airport ‘77 at the Studio Cinema. I remember they had a fish tank in the lobby. The aquarium was filled with water with a few goldfish, and sitting at the bottom of the tank was a model of a jet. Just like in the movie.

1970s photo added courtesy of the Chicago’s Extinct Businesses Facebook page. This description had been added by James Piscitelli on their Facebook page.

Studio Cinema was a single-screen movie theatre that opened in 1962 and closed in 1979. It was operated by General Cinema corporation in the 70’s. Two years later in 1981 it would become the Chicago Ridge Theatre in which was opened by Essaness Theatres.