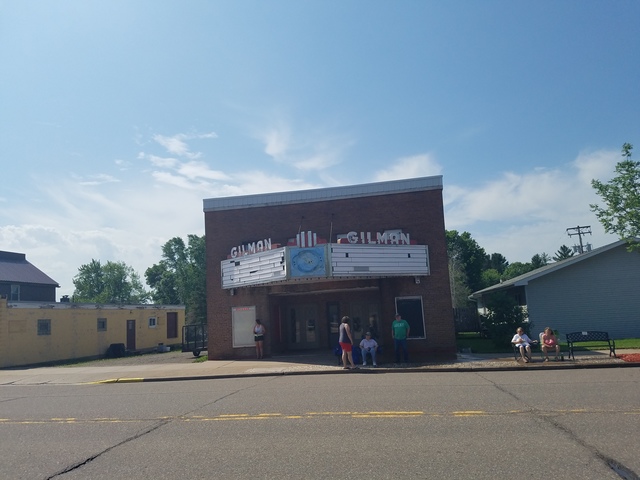 The Gilman Theatre was opened in 1946. It was closed in 1984 when a fire damaged the lobby. It has since become a church.

Here is part of a July 1999 article from the Milwaukee Journal:

When Ward Engelke left his job as a pastor dealing with troubled teens in Milwaukee and moved to northern Wisconsin to take a factory job, he thought he had put his preaching days behind him.

He also believed he had escaped many of the problems that he had witnessed on Milwaukee’s south side, where he helped bring spiritual guidance to gang members and others.

Engelke was wrong on both counts. He now is the pastor of a fledgling church in this Taylor County village of 412 people that is holding services in a renovated 53-year-old movie theater that he and his wife, Trish, purchased for $15,000. The movie house, opened in 1946, was closed in 1984 when a fire damaged the lobby.

Should be listed as closed. Functioning only as a church according to their Facebook page.

My Grandparents had a farm right outside of Gilman, so I usually visited this area in the summer. During these vacations, I often hung out with my cousins. I remember seeing the movie Easy Rider here in the summer of 1969; I was ten at the time. Fortunately, my cousins were old enough to qualify as my guardians, otherwise I would not have been able to see the movie. Easy Rider was considered pretty radical for Gilman at that time. It was rated R and was about hippies, bikers and contained a lot of drug use.