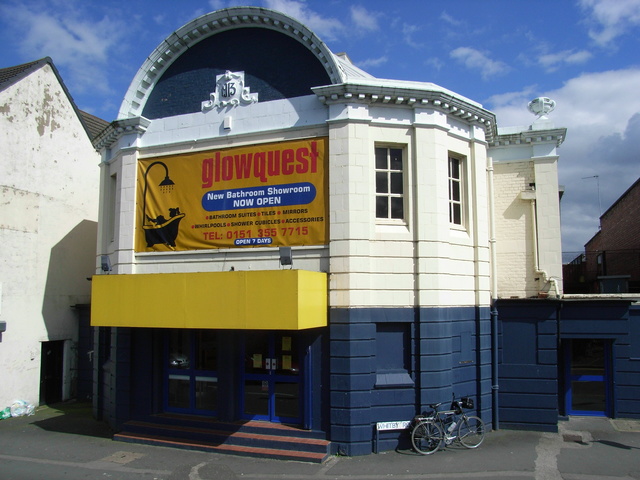 The Queen’s Cinema was opened in 1913 by the Ellesmere Port Picture Palace Co. Seating was provided in stalls and circle and the auditorium had a barrel-vaulted ceiling, typical of purpose-built cinemas of this period. By the early-1930’s it was operated by the Bootle based George Prince Circuit.

From February 1968 it began a mixed policy of films and bingo on different days. In November 1968, films were dropped entirely and it became a full time independent bingo club, later becoming a Mecca Bingo Club.

The bingo club closed in spring-2004 and in 2005 the building was converted into a bathroom & shower showroom.

The former Queen’s Cinema is a Grade II Listed building, designated by English Heritage in 2000.

A Fantastic building,especially inside, most of the interior features remain,including the seats on the balcony, I have been in there recently,not to look at the bathrooms though!this is an example of how these buildings can be put to other uses and not just demolished!. My late grandmother used to work here as a cleaner when it was a cinema in the late 50’s,apparently under the stage is where she had her tea breaks!!

I was a projectionist at the “Queens” in the early 1950’s. The projectors were Kalee 21 with Kalee lamphouses and Westrex sound heads. To enter the projection room we had to climb a steel ladder on the balcony foyer and open a trap door. It was quite difficult to get the film transit cases up into the projection room as they were heavy.