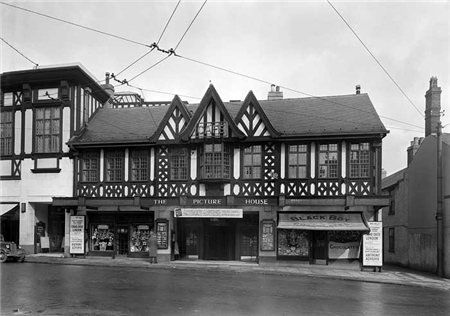 The Picture House opened on 10th September 1923 with Frank Keenan in "Hearts Affair" and Buster Keaton in "The Playhouse" and was built for and operated by the Chesterfield Picture House Co. Ltd. The façade of the building is decorated in a half timbered Tudor style. Inside the auditorium there was a Neo-Classical style of decoration, with seating for 1,328 in stalls and circle. The cinema was equipped with a Jardine 3Manual/23 stop Concert organ which was opened by Edwin Booth. It was on this instrument that Reginald Dixon had his first organ instructions, he later became one on the UK’s most famous organists. Located to the left of the cinema there was a large café/restaurant and ballroom with a stained glass central dome in the ceiling.

The Picture House was closed for a period in 1930 when the auditorium was extended to the designs of Sheffield architect Harold J. Sheppherd, who had originally designed the cinema. It re-opened on 7th July 1930 with an increased seating capacity of 1,559, screening the talking picture "Paris" starring Jack Buchanan.

From 9th November 1936 the Picture House was taken over by Oscar Deutsch and became part of his Odeon Theatres Ltd. chain. It was re-named Odeon in 1937.

It continued as Chesterfield’s premier cinema for many years, but when CinemaScope was introduced in the mid-1950’s, there was a problem, as the Odeon had a very narrow proscenium arch. There was no way of fitting a wider screen forward of the existing proscenium and so when a wide screen film was shown, the top masking was lowered to give a ‘letterbox’ effect.

The restaurant was closed in 1969 and the ballroom was converted into the ‘Fusion Disco’. By 1975, this had closed and had been converted into a bar and exhibition space. The Odeon closed as a cinema on 19th June 1981 with Kurt Russell in "Escape From New York" and "12th Squadron Buccaneers".

The building lay unused until 1987 when it was purchased by Chesterfield Borough Council and refurbished as a concert, conference and exhibition hall and banquet facility named The Winding Wheel.

From October 2000, the Odeon was designated a Grade II Listed building by English Heritage.

A vintage photograph of the Odeon in December 1967 playing the Rank release film:
View link

I have been trying to locate a projectionist who worked here in the 1960’s and who will be in his sixties now.

Not only did the Picture House have a theatre organ it also boasted a full orchestra. My father played the clarinet there and I still have copies of the music he played for the silent movies which were the first films shown at this cinema. My mother was the cinema cashier and used to dance the Charleston with Reg Dixon who subsquently became the musical director at Blackool Tower.

(Incidentally, when I tried searching for “Chesterfield”, nothing came up).

A view of the proscenium from May 2008 is here, and a shot of the ballroom from the same time is here

We are currently working on an exhibition for the Winding Wheel. Cousin Kay, are you able to contact me on .uk. I would love to hear more about the story you have mentioned above. Thank you