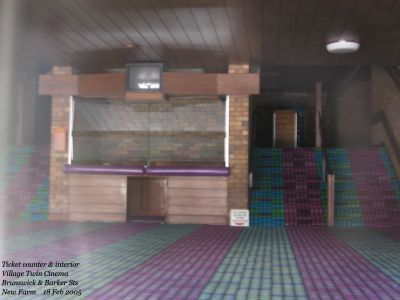 Located in New Farm, a trendy inner-city suburb of Brisbane. This opened around 1921 as the Merthyr Picture Palace, it had a seating capacity of 1,143. In 1938, it was re-modeled by Scottish born architect George Rae and was re-named Astor Theatre. By 1951 it was operated by Merthyr Theatres Pty. Ltd.

After a second screen was added, the Village Twin Cinemas re-opened in late-1970, and had been planned by architect Ron G. Monsborough. It was the first twin cinema complex in Queensland. Cinema One [The Blue Room] had a seating capacity of 555, and Cinema Two [The Purple Room] could seat 352.

Work had begun on a restoration of the building but the work was stopped when severe structural problems were discovered. The building was found to be unstable.

In early-2010, plans were proposed to convert the building into office use, and bring back the Purple Room auditorium as a cinema. Despite being Heritage listed, it was partially demolished by removing the main auditorium in August 2011. It was expanded and reopened by Event Cinemas as the New Farm Six Cinemas in January 2015.

My Grandfather George Halliday, built the Merthyr Picture Palace in 1921, on the site of the Village Twin Cinema, Brunswick Street New Farm. It was open roofed, and my father Mervyn, worked in the ticket office. He told us many stories as children; how my grandfather got some opposition from another local cinema owner, by questioning the accuracy of the surveying of the outside wall. The Brisbane City Council cleared my grandfather, as it was just an attempt to delay the cinemas opening. George Halliday went on to open the Halliday’s Turkish Baths, on a rooftop of a high rise building in the heart of Brisbane. For more information, go to http://www.dhptv.com/dhptv/Tributes.html

There is much activity in this building at the moment and the new owners have plans to re-build onto the back part of the building that had to be demolished for safety reasons.

It is now open as a six-screen cinema – the “Purple” room has been authentically restored. It is now the “New Farm Six Cinemas” complex.